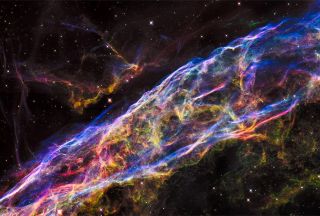 The Veil Nebula as seen by Hubble. Because it looks cool.
(Image: © NASA/ESA/Hubble Heritage Team)

The universe shouldn't exist, according to new ultra-precise measurements of anti-protons.

But the fact that I'm typing this article and you're reading it, however, suggests that we are here, so something must be awry with our understanding of the physics the universe is governed by.

The universe is the embodiment of an epic battle between matter and antimatter that occurred immediately after the Big Bang, 13.82 billion years ago. Evidently, matter won — because there are galaxies, stars, planets, you, me, hamsters, long walks on sandy beaches and beer — but how matter won is one of the biggest mysteries hanging over physics. [The Strangest Things in Space]

It is predicted that equal amounts of matter and antimatter were produced in the primordial universe (a basic prediction by the Standard Model of physics), but if that's the case, all matter in the universe should have been annihilated when it came into contact with its antimatter counterpart — a Big Bang followed by a big disappointment.

This physics conundrum focuses on the idea that all particles have their antimatter twin with the same quantum numbers, only the exact opposite. Protons have anti-protons, electrons have positrons, neutrinos have anti-neutrinos etc.; a beautiful example of symmetry in the quantum world. But should one of these quantum numbers be very slightly different between matter and antimatter particles, it might explain why matter became the dominant "stuff" of the universe.

So, in an attempt to measure one of the quantum states of particles, physicists of CERN's Baryon–Antibaryon Symmetry Experiment (BASE), located near Geneva, Switzerland, have made the most precise measurement of the anti-proton's magnetic moment. BASE is a complex piece of hardware that can precisely measure the magnetic moments of protons and anti-protons in an attempt to detect an extremely small difference between the two. Should there be a difference, this might explain why matter is more dominant than antimatter.

"It is probably the first time that physicists get a more precise measurement for antimatter than for matter, which demonstrates the extraordinary progress accomplished at CERN's Antiproton Decelerator," said physicist Christian Smorra in a CERN statement. The Antiproton Decelerator is a machine that can capture antiparticles (created from particle collisions that occur at CERN’s Proton Synchrotron) and funnel them to other experiments, like BASE.

Antimatter is very tricky to observe and measure. Should these antiparticles come into contact with particles, they annihilate — you can't simply shove a bunch of anti-protons into a flask and expect them to play nice. So, to prevent antimatter from making contact with matter, physicists have to create magnetic vacuum "traps" that can quarantine anti-protons from touching matter, thereby allowing further study.

A major area of research has been to develop ever more sophisticated magnetic traps; the slightest imperfections in a trap's magnetic field containing the antimatter can allow particles to leak. The more perfect the magnetic field, the less chance there is of leakage and the longer antimatter remains levitating away from matter. Over the years, physicists have achieved longer and longer antimatter containment records.

In this new study, published in the journal Nature on Oct. 18, researchers used a combination of two cryogenically-cooled Penning traps that held anti-protons in place for a record-breaking 405 days. In that time they were able to apply another magnetic field to the antimatter, forcing quantum jumps in the particles’ spin. By doing this, they could measure their magnetic moments to astonishing accuracy.

These tiny measurements have huge — you could say: universal — implications.

"All of our observations find a complete symmetry between matter and antimatter, which is why the universe should not actually exist," added Smorra. "An asymmetry must exist here somewhere but we simply do not understand where the difference is."

Now the plan is to improve methods of capturing antimatter particles, pushing BASE to even higher precision, to see if there really is an asymmetry in magnetic moment between protons and anti-protons. If there’s not, well, physicists will need to find their asymmetry elsewhere.