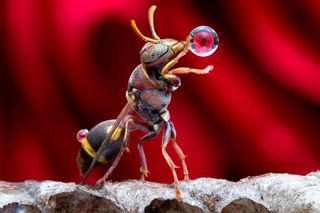 An artfully positioned rose is reflected in a spit-globe produced by a Malaysian wasp.
(Image: © Lim Choo How/Caters)

A jaw-dropping image of what appeared to be a bubble-blowing wasp balancing the liquid sphere on its front legs captivated Reddit users yesterday (Oct. 26). But what's the wasp actually doing?

Several of the industrious insects were recently observed with droplets dangling from their mouths. Turns out, they were removing excess moisture from their nest by hoovering up water and then expelling it as minuscule water globes, which makes the wasps look like they're blowing perfectly round bubbles.

Photographer Lim Choo How captured stunning close-up images of these busy wasps with tiny beads of liquid emerging from their mouths, as they worked to dry off a nest in a factory compound in Kedah, Malaysia, earlier this year. [Gallery: Dazzling Photos of Dew-Covered Insects]

Once a wasp expels a droplet, it flicks the water away with its forelegs. A group of wasps can be seen working together on a vertical strip of nest material, in a video shot by How and posted to YouTube on June 22.

This behavior is common in wasps, particularly among those that inhabit moist, tropical habitats, entomologist James Carpenter, a curator at the American Museum of Natural History (AMNH) in New York City, told Live Science in an email.

"The wasps lap up the water and then expel it; it is presumably held in their crops," said Carpenter, whose research focuses on the evolutionary relationships and behaviors of social wasps.

By sucking water from the surface of their nests, the wasps can keep the delicate structures from becoming saturated with moisture and disintegrating, entomologist John Wenzel, director of the Powdermill Nature Reserve at the Carnegie Museum of Natural History in Pennsylvania, told Live Science in an email.

"This is a mechanism to help dry out the paper nest," Wenzel said. "During construction, many species spit saliva on the nest that hardens into a silk-like surface that also helps repel water. These methods are necessary because many of the species build with a paper that is adequate when dry but comes apart when wet, so the nest might collapse from the combined weight of the brood within and the water in the paper if they did nothing."

The wasps in the photos appear to belong to the genus Mischocyttarus, a large group of social wasps found mostly in neotropical regions, Wojciech Pulawski, a curator emeritus of entomology with the California Academy of Sciences, told Live Science in an email.

Flies are also known for their "bubble blowing" — extruding droplets of liquid — though little is known about why they do it, according to a blog post by Julie Feinstein, a collection manager with the Sackler Institute for Comparative Genomics at the AMNH.

"A bubble-blowing fly sits still as if preoccupied," Feinstein wrote in the post. "It exudes a drop of liquid from the mouth and then sucks it back in. Then it does it again, and again, and again. The bubbles range from clear to opaque, but usually one fly in a single sitting makes just one kind."

"Bubbling" in flies — as it is called in a study published in 1992 in the Journal of Insect Behavior — may be linked to digestion, allowing the flies to eliminate excess water to help them process their food more efficiently, the study authors wrote.