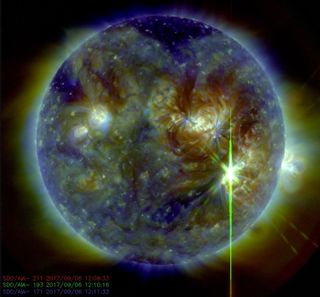 As if Hurricane Irma wasn't enough, now the sun is acting up.

A strong geomagnetic storm watch is in effect as scientists wait to see if a coronal mass ejection (CME) is winging toward Earth. A strong solar flare, often associated with CMEs, was detected today (Sept. 6) at 8:02 a.m. ET, along with a weaker one. That solar flare has the potential to degrade high-frequency radio communications and some low-frequency navigation systems, according to the National Oceanic and Atmospheric Administration (NOAA)'s Space Weather Prediction Center. A CME could cause additional impacts, including disrupting satellite communications.

Fortunately, this outburst of solar activity isn't anything that the weather satellites tracking Hurricane Irma's path through the Caribbean can't handle, said Terry Onsager, a physicist at the NOAA Space Weather Prediction Center. [Hurricane Irma: Everything You Need to Know About the Monster Storm]

"The satellites are designed very specifically to take into account these kinds of events," Onsager told Live Science. And while some older satellites may struggle when hit with charged particles and strong magnetic fields from the sun, Onsager said, the GOES-16 satellite providing images of Irma is brand new. It launched in November 2016.

Though today's solar activity is unlikely to affect hurricane monitoring, the event highlights how forecasters are at the mercy of the sun's weather when trying to predict weather impacts on Earth. Satellites make it possible to track a storm like Irma in extensive detail, in near-real time. Solar weather, like flares and CMEs, can affect Earth's atmosphere and disrupt satellites' functioning. A solar flare is a sudden release of electromagnetic radiation from the sun's surface; a CME is an eruption of charged plasma and magnetic field.

Radio-wave bursts emanating from a solar flare can scramble satellite communications and navigations, Robert Steenburgh, a space scientist at the Space Weather Prediction Center, told Live Science in an email. A coronal mass ejection can cause a geomagnetic storm around Earth, disturbing the layer of charged particles around the planet called the ionosphere, which can scramble the calculations used in global positioning systems (GPS), Steenburgh added.

The sun's activity runs on an 11-year cycle called the solar cycle. The sun is on solar cycle 24, so numbered because it's the 24th since record-keeping started in 1755. The maximum activity of solar cycle 24 (which started in 2008) occurred in 2014 and 2015, according to NOAA. The sun is currently coasting toward a more quiescent phase, Onsager said. But the solar cycle's ups and downs are based on frequency, not magnitude of activity.

"We can have large space weather events at any time during the solar cycle," Onsager said.

The sun's activity this week is notable, but "by no means extreme," Onsager said. Solar protons, positively charged particles ejected by a solar flare, are currently elevated, he said, necessitating a radiation storm warning. Fortunately, this radiation is mostly dangerous only to those in orbit: The accelerated protons can cause biological damage to astronauts and circuit damage to satellites, according to NOAA. These protons are also to blame for high-frequency radio communication disruption, as they cause electrical disturbances in the atmosphere that can absorb radio waves.

Meanwhile, the two solar flares detected this morning included one at 6:10 a.m. ET that was classified as an X2.2 flare. The X indicates an X-class flare, the strongest class of solar flares. It was the strongest solar flare recorded since 2015 — that is, until 8:02 a.m. ET, when the sun threw off an X9.3 flare. That was the first X9-level flare since December 2006, Steenburgh told Live Science. X9 flares can shoot loops of plasma many times the size of the Earth off the sun's surface, according to NASA, but they're not near the max of what the sun can do. According to the space agency, the strongest solar flare on record was at least an X28 measured in 2003. The actual size of that explosion isn't known, because it overwhelmed the instrument used to measure it.