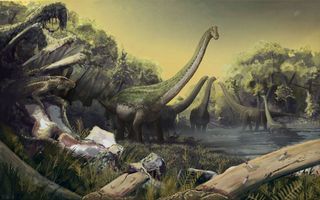 A humongous "wide-necked" dinosaur — one that weighed as much as two cars — stomped across the landscape of prehistoric Africa during the Cretaceous period, a new study finds.

The 5-ton beast, a titanosaur (an herbivorous long-necked and long-tailed dinosaur) was tall; its head reached 13 feet (4 meters) in the air when its neck was extended. The dinosaur's remains were found in rock in southwestern Tanzania dating between 100 million and 70 million years ago, the researchers said.

It's not uncommon to unearth titanosaurs in South America, but it's rare to find the giant dinosaurs in Africa, making the newly identified creature a remarkable find, the researchers said. [Titanosaur Photos: Meet the Largest Dinosaur on Record]

Researchers named the titanosaur Shingopana songwensis, which they said was 26 feet (8 meters) long, or about the size of an orca whale. Its genus name means "wide neck" in Swahili, whereas "shingo" and "pana" are the Swahili words for "neck" and "wide," respectively, in reference to the giant's "bulbous" neck vertebra, the researchers wrote in the study. The species name honors the Songwe region of the Great Rift Valley in Tanzania, where the dinosaur was first discovered in 2002, and excavated in the following years.

After analyzing S. songwensis' fossilized bones — in which ancient insects burrowed shortly after the animal's death — the researchers realized the dinosaur has more in common with South America titanosaurs than it does with other African titanosaurs.

"Shingopanahad siblings in South America, whereas the other African titanosaurs were only distant cousins," lead study researcher Eric Gorscak, a recent doctoral graduate of Ohio University and now a postdoctoral researcher at the Field Museum of Natural History in Chicago, said in a statement.

Divisions between tectonic plates may explain these differences. Evidence suggests that northern and southern Africa were divided during the Cretaceous, a period that lasted from about 145.5 million to 65.5 million years ago.

"This discovery suggests that the fauna [animals] of northern and southern Africa were different in the Cretaceous," Judy Skog, program director at the National Science Foundation's Division of Earth Sciences, which supported the research, said in the statement. "At that time, southern African dinosaurs were more closely related to those in South America and were more widespread than we knew."

Shingopanalikely roamed ancient southern Africa alongside Rukwatitan bisepultus, a nearly 8-ton titanosaur discovered by the same team in 2014. However, both titanosaurs were dwarfed by what is likely the largest titanosaur (and dinosaur, for that matter) on record: the 69-ton Patagotitan mayorumfrom South America, which also lived about 100 million years ago.

"We are still only scratching the surface with regard to understanding the diversity of organisms and the environments in which they lived on the African continent during the Late Cretaceous," study co-researcher Patrick O'Connor, a professor of anatomy at Ohio University, said in the statement.

The study was published online today (Aug. 24) in the Journal of Vertebrate Paleontology.