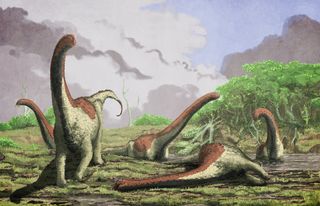 An artistic interpretation of a new species of titanosaurian dinosaur in Tanzania that paleontologists named Rukwatitan bisepultus.
(Image: © Mark Witton | University of Portsmouth)

A giant dinosaur found in Tanzania once lived during a lush, green period when flowering plants flourished, about 100 million years ago, paleontologists report. The new dino species is a rare find in sub-Saharan Africa, where far fewer dinosaur fossils are discovered than in South America, the researchers said.

Paleontologists discovered the massive fossil in 2007 during fieldwork in the Rukwa Rift Basin in southwestern Tanzania.

Political instability in certain parts of Africa can prevent dinosaur digs, but fossils in this part of the world are also elusive for geological reasons. As the continents drifted apart, Africa did not move as much as the other continents did, leaving its fossils buried instead of pushed up by plate tectonics, said Patrick O'Connor, a professor of anatomy at Ohio University in Athens, Ohio, and one of the researchers on the new study. [See photos of the dinosaur dig in Tanzania]

Africa also had fewer ideal areas where sediment could quickly bury a creature and begin the fossilization process. Politics and geology, "those two things together account for why we don't know so much about continental Africa as we do about other parts of the world," O'Connor said.

Joseph Sertich, then a graduate student at Stony Brook University in Long Island, New York, and now a paleontologist at the Denver Museum of Nature & Science, was the first to spot the bones in the Rukwa Rift Basin.

"He scrambled into a gully and found the skeleton coming out [of] the cliff surface," O'Connor said.

A careful excavation by local coal miners and paleontologists in 2007 and 2008 suggests that muddy elements had buried the dinosaur's remains — not once, but twice, O'Connor told Live Science. About 100 million years ago, the dinosaur likely died on a muddy floodplain. Mudstone eventually covered its body, but shortly after, a river running through the plain cut away at the mudstone, exposing part of the skeleton and encasing it in sandstone.

A river still runs near the site, and its drainage through the cliff face had begun to uncover the ancient skeleton, O'Connor said.

The researchers recovered about two dozen fossilized bones, enough to determine that they had a new species on their hands, O'Connor said. An analysis of the bones' shapes and features suggest the dinosaur was a titanosaurian, a member of the giant, long-necked and plant-eating sauropod dinosaurs.

"A lot of what we know about titanosaurian evolution and their biology stems from South America, where there's a lot of specimens," Gorscak said. Titanosaurian remains are found on every continent including Antarctica, but "the early evolutionary history outside of South America is fuzzy."

The new finding helps bridge that gap, said Matthew Lamanna, a curator of vertebrate paleontology at the Carnegie Museum of Natural History in Pittsburgh, who was not involved with the study.

Rukwatitan is important because it's "one of the very few Cretaceous-aged dinosaurs known from Africa south of the Sahara Desert," Lamanna told Live Science in an email. "That part of the world is one of the biggest 'black holes' in our understanding of dinosaurs," he said.

Previously, paleontologists found the titanosaurian Malawisaurus dixeyi in Malawi, but the Rukwatitan fossils are markedly different in shape and size from that specimen and other titanosaurians found in northern Africa, O'Connor said.

Rukwatitan weighed between 10 and 15 tons — about as much as two elephants but not nearly as much as Dreadnoughtus schrani, another type of titanosaurian, discovered in Argentina, that weighed about 65 tons, Gorscak said. He and his colleagues used a computed tomography (CT) scan to view Rukwatitan's bones and its internal structure. Like other titanosaurians and meat-eating theropods — dinosaurs that may have given flight to birds — Rukwatitan's neck bone was hollow and filled with air.

"It's important for understanding the whole rest of the evolution of the group, especially since it comes from such a rare time and place," said Michael D'Emic, a research instructor in the department of anatomical sciences at the Stony Brook University School of Medicine, who was not involved in the study.

The study was published today (Sept. 8) in the Journal of Vertebrate Paleontology.

Editor's Note: This article has been updated to update Eric Gorscak's title.