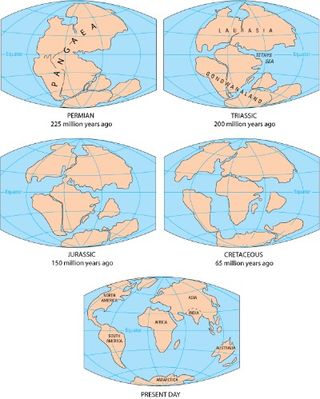 The break up of the supercontinent Pangaea.
(Image: © USGS)

During the new DC Comics Universe series "Flashpoint," in which a time-traveling supervillain alters the past to warp the present, Life's Little Mysteries presents a 10-part series that examines what would happen if a major event in the history of the universe had gone just slightly different.

Part 3: What if ... the supercontinent Pangaea never broke up?

From about 300 million to 200 million years ago, all seven modern continents were mashed together as one landmass, dubbed Pangaea . The continents have since "drifted" apart because of the movements of the Earth's crust, known as plate tectonics. Some continents have maintained their puzzle piece-like shapes: Look at how eastern South America tucks into western Africa.

Life would be: Far less diverse. A prime driver of speciation the development of new species from existing ones is geographical isolation, which leads to the evolution of new traits by subjecting creatures to different selective pressures. Consider, for example, the large island of Madagascar, which broke off from Gondwana, Pangaea's southern half, 160 million years ago. About nine out of 10 of the plant and mammal species that have evolved on the island are not found anywhere else on the planet, according to Conservation International.

A locked-in Pangaea further constrains life's possibilities because much of its interior would be arid and hot, said Damian Nance, a professor of geosciences at Ohio University. "Because of Pangaea's size, moisture-bearing clouds would lose most of their moisture before getting very far inland," Nance told Life's Little Mysteries.

Excess mass on a spinning globe shifts away from the poles, so the supercontinent would also become centered on the equator, the warmest part of the planet. Reptiles could deal with such a climate better than most, which is partly why dinosaurs, which emerged during the time the planet's surface was one giant chunk, thrived before mammals.

Previously: What would the world be like if dinosaurs had not gone extinct ?

Next: What would life be like if there were more than two dominant sexes ?