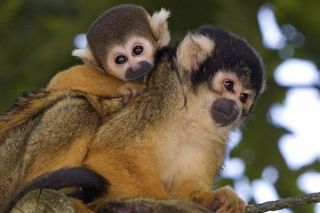 Much as a seven-year-old addresses his letters with a gosh-darn-cute hierarchy of locations ("123 Main Street, Columbus, Ohio, U.S.A, Earth, the Solar System, the Milky Way galaxy"), taxonomists define an organism's "home" on the plane of living things with a set of predicates that increase in specificity from "domain" and "kingdom" to "genus" and "species."

Determining which categories an organism falls into is no easy matter. In general, physical characteristics determine grouping. For example, one important distinction concerns how an organism gets its nutrients. Members of the plant kingdom obtain nutrients through photosynthesis (and share certain other traits as well).

Speciation — the evolutionary process by which one species of organism becomes two — is notoriously difficult to put one's finger on. It doesn't help that there exists no universally accepted definition of "species." Reproductive methods vary so wildly from one region on the plane of living things to another that a single rule couldn't possibly cover the diversity between (or even within) kingdoms. However, taxonomists have devised certain regionally useful standards for differentiation. In addition to having physical similarities, members of a sexually-reproducing species must be able to successfully produce healthy, virile offspring. (Breeding horses and donkeys may produce mules, but these hybrids are usually sterile.)

In general, two diverging groups in a species are said to have undergone speciation when they are reproductively isolated from one another — when their distinctiveness is preserved across generations of members. For primates like us, this implies an inability to mate with a member of the divergent species.