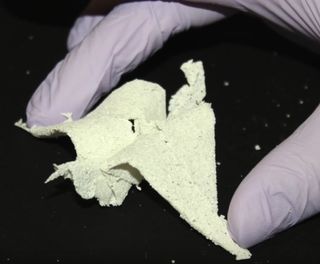 Scientists have created paper-like biomaterials from organs such as the ovaries, uterus, heart, liver and muscle that are thin and flexible enough to fold into origami birds and other structures.

These new "tissue paper" materials retain the cellular properties of the organ, so they could help the body regenerate the relevant organ tissue to aid healing of wounds, scientists said.

"Because it has components that are found in the actual tissue in the organs, the cells will recognize it once it's implanted," study co-author Ramille Shah, assistant professor of materials science and engineering at Northwestern University in Evanston, Illinois, said of the tissue paper in a video statement. [11 Body Parts Grown in the Lab]

An accidental ink spill sparked the invention of these new materials. Lead study author Adam Jakus, formerly a materials engineer at Northwestern University, had created an ink made of an ovary for use in a 3D printer. When he went to wipe up the spill, the ovary ink had already formed a dry sheet.

"When I tried to pick it up, it felt strong," Jakus said in a statement. "The light bulb went on in my head. I could do this with other organs."

So, Jakus and his colleagues took a pig or cow organ and used detergents to strip it of its cells. This left behind the extracellular matrix of the organ — the scaffold of proteins that helps give an organ its structure.

The scientists then freeze-dried this organ material, ground it into a powder and mixed it with a solvent to create an ink. When films of this ink were dried, they became flat sheets of paper-like materials.

Each thin, flexible sheet of tissue paper felt and behaved much like standard office paper, Jakus said. He could even fold these sheets into an origami bird, he said.

"They're easy to store, fold, roll, suture and cut, like paper," Jakus told Live Science. "Their flat, flexible nature is important if doctors want to shape and manipulate them in surgical situations."

Each sheet of tissue paper contains residual biological molecules and protein structures from its source organs. In experiments, this tissue paper could support the growth of adult human stem cells.

The researchers suggested their new materials could stimulate cells to behave in potentially therapeutic ways. For instance, tissue paper made of muscle could help foster the growth of muscle cells.

"A lot of muscles in the face are flat and thin, and perhaps muscle tissue paper can help foster the growth of muscle cells for people who've experienced traumatic injuries, or children born with congenital defects," Jakus said.

If a kidney or a uterus is nicked by an injury or during surgery, "those organs can bleed a lot very quickly," Jakus said. "Tissue paper could act like an internal bandage for such cuts."

In addition, in experiments, ovarian tissue paper seeded with ovarian cells could produce hormones linked to puberty and fertility. Such implants could help restore normal hormone function in female cancer patients, who often lose their hormone function due to chemotherapy and radiation, said study co-author Teresa Woodruff, a reproductive scientist at Northwestern University.

"It is really amazing that meat and animal byproducts like a kidney, liver, heart and uterus can be transformed into paper-like biomaterials that can potentially regenerate and restore function to tissues and organs," Jakus said in the statement. "I'll never look at a steak or pork tenderloin the same way again."

Future research should explore if these new materials are safe and effective for use in the human body, Jakus said. In addition, the scientists are investigating making 3D objects from their organ inks using 3D printers, he said.

Jakus is now chief technology officer and co-founder of the startup company Dimension Inx, which will develop, produce and sell 3D-printable materials primarily for medical applications. These new inks will be licensed to Dimension Inx.

The scientists detailed their findings today (Aug. 7) in the journal Advanced Functional Materials.