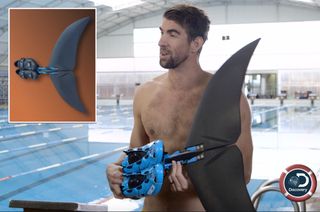 Michael Phelps is going to race a great white shark, and marine biologists are betting on the shark. The ultimate reason boils down to physics.

To get a leg (or tail) up during Discovery Channel's "Shark Week" episode, Phelps will wear a custom-made mechanical fin on his feet that mimic's a great white's tail.

This so-called monofin, made by Lunocet, displaces water more efficiently than human feet do, and it should add several miles per hour to Phelps' speed, according to the company. [See Photos of Great White Sharks Breaching the Water's Surface]

When the great white shark swims, it uses its crescent moon-shaped tail, which is buttressed by a caudal keel, to push it forward, fast, according to experts on the Discovery Channel's "Shark Week" episode.

Brooke Flammang, assistant professor of biological sciences at the New Jersey Institute of Technology, told Live Science via email that any aquatic animal that has a tail will move it back and forth to generate thrust — fish vertically and whales horizontally. As the tail gets to the end of the stroke, it changes direction. That change in direction generates a vortex, pushing water behind and generating thrust, or a forward force.

In a 2011 study of shark locomotion (using dogfish), Flammang found that sharks can go faster because they stiffen their tails in the middle of each stroke. She said the shark's tail creates a vortex when it is as far as it can go on one side as the shark begins its stroke. It releases another vortex in the middle of the stroke, and a third one when the next stroke begins on the other side. "The middle one is the oddball one that happens because of the stiffness change," she said. "The extra vortex gives a shark extra thrust that other fish don't have."

Those vortices also give more lift to their pectoral fins so the sharks can keep swimming. Great whites are among the species of shark that must keep moving forward in order to keep oxygen-rich water flowing over their gills. (This is not true of many shark species, such as nurse sharks).

Phelps and his fin

The monofin is supposed to mimic the tail motion of a dolphin or shark. According to the company it works primarily by producing "lift forces," like an airplane wing, and it will generate vortices as well — though nowhere near as efficiently as a shark does.

The Lunocet monofin can reportedly help a swimmer reach up to 8 mph (12.8 km/h). A great white shark will reach speeds of 25 mph (40 km/h) in short bursts, according to the ReefQuest Center for Shark Research.

Phelps won't be able to match the speed of a great white, even with his mechanical fin. The problem is that aquatic animals can also smoothly undulate their entire bodies. This is true of fish, whales, and even seals and otters.

"Part of what makes truly aquatic animals so efficient is the precise timing of their body undulation with the tail changing direction," Flammang said. That undulation means water passes steadily down the body, making a vortex when it reaches the tail. Phelps, being human, can't do that. "Since legs only bend in a couple of places, he won't have a smooth undulation and will lose a lot of power to drag."