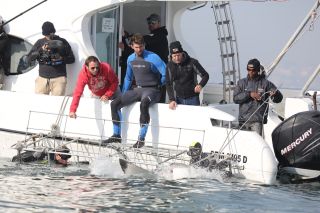 A shark approaches the cage that Michael Phelps is about to enter.
(Image: © Discovery Channel)

It's hard to imagine how Olympic-gold-medal swimmer Michael Phelps could win in a race against a great white shark, but the Discovery Channel is giving him every advantage in the book.

During Sunday's program, "Phelps vs. Shark: Great Gold vs. Great White," Michael Phelps will wear a monofin — a single fin-like foot flipper that will help him swim like a shark — as well as a wetsuit known as the Phantom, which increases buoyancy and reduces drag, according its maker Aqua Sphere.

But even with these accessories, can Phelps beat a great white shark (Carcharodon carcharias), a fish that can swim upwards of 25 mph (40 km/h)? [7 Unanswered Questions About Sharks]

"My money is on the shark, even with a Phelps' monofin," Andrew Nosal, a marine biologist and shark scientist from Scripps Institution of Oceanography in San Diego, who is not involved with the Discovery Channel program, told Live Science in an email.

Few details are available about the 100-meter (330 feet) race, which the Discovery Channel filmed last month. But channel spokespeople confirmed that the race takes place off the coast of South Africa, although they wouldn't reveal the stroke used by Phelps, who has set 39 world records and won 23 Olympic golds.

But Phelps confirmed that the race was held in open water and that "we were very safe. We had about 15 safety divers around," he told Entertainment Weekly. In addition, Phelps told Time that he and the shark "weren't side by side."

"For me, the biggest thing was just trying to stay warm; that was something that was extremely challenging, just because the water is 55 degrees [Fahrenheit, or 13 degrees Celsius]," Phelps said in the Entertainment Weekly interview. "It's something that a shark can survive in, and a human really can't survive in water like that."

Unlike most other sharks, great whites are endothermic, or "warm blooded," and thus can survive and swim quickly in cold water, Nosal said.

"This means their core body temperature is warmer than [that of] the surrounding water, allowing their aerobic swimming muscles to contract harder and for longer periods of time," Nosal said.

This endothermy is maintained by a special arrangement of blood vessels called "countercurrent heat exchangers," which prevent metabolic heat generated from core muscle contractions from being lost to the surrounding water, he said.

Great whites use their extreme speed to ambush prey, such as elephant seals and other marine mammals, which are smart and nimble, Christopher Lowe, a professor of marine biology at California State University, Long Beach, told Live Science in a previous interview.

However, great whites aren't even the fastest of the endothermic sharks. The mako shark has been estimated to swim between 40 mph and 60 mph (64 and 96 km/h), Nosal said.

In contrast, Phelps has been fast … but for a human, not for a shark.

It should be noted that several excerpts from the program made available to reporters paired footage of a shark with ominous, suspenseful music. This isn't uncommon — most movies and even nature documentaries play scary music when a shark swims onto the screen. However, menacing music makes people feel unjustly terrified of sharks, Nosal and his colleagues found in a 2016 study published in the journal PLOS One.

If people are frightened of sharks, they likely won't work to protect the animals, even those that are endangered, Nosal told Live Science in a previous interview.

The program will air at 8 p.m. ET/PT on Sunday, July 23, on the Discovery Channel.