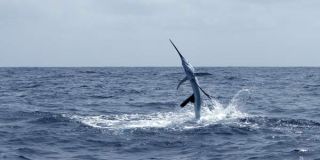 A streamlined sailfish leaps from the water.
(Image: © Lunamarina | Dreamstime)

Blue to gray in color and reaching up to 10 feet (3.05 meters) in length and 220 pounds (99.8 kilograms) in weight, the sailfish is considered the fastest marine creature. These streamlined beasts have been clocked at 68 miles per hour (30.4 meters per second), which, to be fair to the other fish in the sea, includes the sailfish's leaps into the air, during which it moves faster than it does in the water.

Think you could out-swim a sailfish? If you were to put this speedy fish in a pool to swim a 200-meter race, he could do it in less than 10 seconds. For comparison, Olympic gold-medalist Michael Phelps swims the 200-meter freestyle in about 1.42 minutes, which translates to 4.7 miles per hour (2.1 meters per second).

If you exclude leaping, the killer whale would be the speediest fish, clocking in at 34.5 miles per hour (15.4 meters per second), according to the ReefQuest Centre for Shark Research. This giant among sea creatures could swim the 200-meters in about 13 seconds.

Why Are Asian Carp So Fearsome?