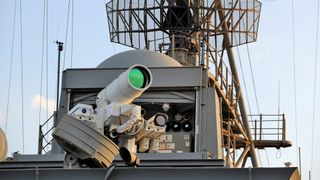 The newly developed Laser Weapon System (LaWS) is situated on the USS Ponce, which is deployed to the Persian Gulf.
(Image: © John F. Williams/US Navy)

The world's first laser weapon — one that can "kill" threatening, airborne drones — is ready for action, according to news sources.

The laser, known as the Laser Weapons System (LaWS), may seem as though it were pulled straight from a James Bond movie, but it's entirely functional and can shoot with stunning accuracy, the U.S. Navy told CNN. The LaWS is currently deployed aboard the USS Ponce, an amphibious transport ship, in the Persian Gulf.

"Operationally, it works just like a laser pointer," Lt. Cale Hughes, a LaWS officer, told CNN. "There's a chamber inside with special materials that release photons." [7 Technologies That Transformed Warfare]

The LaWS laser beam is completely silent and invisible. It's also fast: The laser travels at the speed of light (186,000 miles per second, or about 300,000 kilometers per second), meaning it's about 50,000 times the speed of an incoming intercontinental ballistic missile, such as the one North Korea is testing, the Navy told CNN.

The $40 million system requires a team of three to operate it and a small generator to power its electricity supply, according to the Navy.

However, each blast is relatively cheap. "It's about a dollar a shot," Hughes told CNN.

In addition to being able to take down threats in the air, the LaWS can hit and disable objects in the water. The laser's accurate blasts, heated to thousands of degrees, might even mean fewer casualties in combat, Inez Kelly, a U.S. Naval Forces Central Command science adviser, told CNN.

For instance, if the laser is aimed at an enemy boat, operatives can "take out exactly the engine, and not necessarily damage anything else," Kelly said. "That type of precision weapon work is something that you don't really get with conventional weapons, because there tends to be more collateral damage."

Under Geneva Convention rules, armed forces are not allowed to use laser weapons directly against people, reported Optics.org, a site that tracks the photonics industry. The U.S. will abide by that protocol, Rear Adm. Matthew Klunder, chief of naval research, said in 2014 at a news conference in Washington, D.C., according to Optics.org.

The U.S. Navy is already developing second-generation systems that might be able to target threats other than drones and water vessels. These missions are classified, but when asked whether the LaWS could shoot and destroy missiles, USS Ponce Capt. Christopher Wells said "maybe" and smiled, according to CNN.