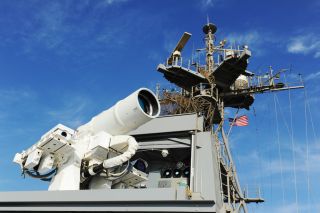 The next generation of futuristic weapons has arrived. The U.S. Navy announced that its high-tech laser weapon is ready to disable and destroy enemy drones and small boats, should the need arise.

The 30-kilowatt laser weapon system (LaWS) is housed aboard the USS Ponce, a naval vessel stationed in the Arabian Gulf— a body of water located south of Iraq that separates the Saudi Arabian peninsula from Iran.

While sailors have not yet used the new laser to destroy any real enemy targets, the Navy is prepared to do just that, if necessary, according to Rear. Adm. Matthew Klunder, chief of naval research. [7 Technologies That Transformed Warfare]

"On USS Ponce, LaWS has been in test and development mode since August 2014 in the Gulf. We are now beyond testing – it's operational and the laser weapon is not in a box waiting for a special occasion,"Klunder told reporters at a news briefing Wednesday (Dec. 10) in Washington, D.C.

Under the Geneva Convention, militaries are not allowed to use laser weapons directly against people — a condition that Klunder said the U.S. Navy with abide by, according to Optics.org. But LaWS doesn't necessarily have to blow anything up to be effective.

Sailors operate the laser using a video game-type controller, according to Navy officials. With this controller, they can perform a variety of operations. If an enemy boat or aircraft gets too close to a Navy ship, the laser can deter the threat with an effect known as optical "dazzling." This nonlethal option — which amounts to a very bright glare — is meant to serve as a warning, giving the adversary a chance to change course without getting blown to smithereens.

But, if a threat keeps coming, sailors aboard the Ponce can increase the strength of the laser's highly concentrated beam, which will knock out the sensors or control systems on an enemy drone or vessel. If the adversary still doesn't get the hint, the beam can be turned up higher, making it capable of destroying the threat altogether.

In recent tests, LaWS successfully hit targets aboard a small boat that was speeding toward the Navy ship. The laser weapon also shot a small drone out of the sky, according to Navy officials.

"We ran this particular weapon, a prototype, through some extremely tough paces, and it locked on and destroyed the targets we designated with near-instantaneous lethality," Klunder, chief of naval research, said in a statement.

The sailors who tested LaWS reported that the weapon worked well even in high winds, heat and humidity — conditions that aren't ideal for the operation of a laser. The data collected from these trial runs will be used to develop new laser weapons for the Navy under the Office of Naval Research's Solid-State Laser-Technology Maturation program. These future lasers could one day be deployed on both large destroyer ships (used to launch missiles) and smaller combat ships, Navy officials said.

Laser weapons systems like the one aboard the USS Ponce could be used in ground-based defense systems, as well as in the air, according to Navy researchers. These weapons are sought after because they don’t require highly explosive gunpowder or pressurized gas to destroy enemy targets, making them safer for military personnel to operate. And since all they require is a steady supply of electricity, laser weapons may also be more reliable than conventional weapons.

"At less than a dollar per shot, there's no question about the value LaWS provides," Klunder said. "With affordability a serious concern for our defense budgets, this will more effectively manage resources to ensure our sailors and Marines are never in a fair fight."

The most recent tests of LaWS are part of several rounds of testing that have occurred over the past three years. In a 2011 test, a laser weapon disabled multiple small boats launched from a U.S. warship. And in 2012, LaWS downed several drones during a naval test of the system.