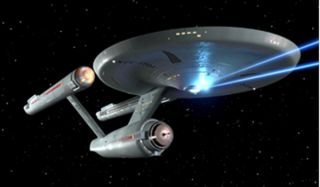 What would science fiction be without laser beams? From handheld ray guns to spaceship-mounted turbolasers, the futuristic weapon of choice definitely involves bright, colorful blasts of energy.

In the early 21st century, projectiles still remain the standard means of inflicting damage from a distance. Yet continued research into "directed-energy" weapons by the United States military, among others, could someday bring lasers to a battlefield near you.

Lasers are already used in guidance, targeting and communication applications, but significant technological obstacles stand in front of turning them into weapons by themselves. For certain niche scenarios, lasers might prove themselves ideal. It seems unlikely, however, that they will ever outright replace missiles and bullets, as they do in so much sci-fi warfare.

"No conventional weapon is a panacea," said Douglas Beason, former associate lab director at Los Alamos National Laboratory. "Why would we expect directed-energy weapons to be any different?"

Lasers are tight rays of photons generated by the excitation of atoms in a liquid, gas or solid; or electrons in a beam. Weapon makers are attracted to lasers because they can shoot faster than any projectile. "You can deliver energy at the speed of light," said Beason.

They also can reach targets with absolute precision while potentially never running out of ammunition. "They call it unlimited magazines," said Beason. "Rather than being able to drop one bomb, you're limited only by the amount of energy you can carry."

Small wonder, then, that the armed forces have long taken interest in photonic weaponry. Yet progress has hardly proceeded at light speed.

Ronald Reagan's Strategic Defense Initiative, which envisioned satellite-borne lasers zapping nuclear missiles out of the sky, was derided as "Star Wars" and canceled in the late 1980s. Two other prominent efforts, the Air Force's Airborne Laser and the Navy's Free Electron Laser — airplane and boat-based, respectively — both got the ax last year after more than a decade of development. [10 Inventions that Changed the World]

Budget concerns and technical issues doomed those projects, but other programs are ongoing. A key hindrance has been drumming up enough energy to boost power into the 100-kilowatt range considered necessary for military effectiveness. "For strategic-type weapons, power is the big bugaboo," said Beason.

Accordingly, for the biggest bang for your buck, you want your weapon to be both massive and moving fast.

"Projectiles are very, very efficient because they have a lot of mass," said Beason. Yet photons, the constituents of lasers, have no mass. In order to achieve kinetic energy-type damage with lasers, Beason said, "you need to have the energy sky-high, and you need to store a lot of it."

With sufficient funding, such a level of weaponry is attainable in perhaps 10 years, Beason thinks. Future operational theaters might well have lasers frying hostile unmanned aerial vehicles, missiles and ships.

Before then, low-power lasers — a parallel area of research — could register their first in-the-field zap. An example is the Humvee-mounted Active Denial System (ADS). This tactical device is intended for use against flesh, not metal.

The ADS beams infrared light that causes its targets to feel a painful burning sensation — potentially helpful in dissuading would-be embassy rushers or breaking up prison fights, two of the many envisioned applications.

Hand me a blaster

Mounted directed-energy weapons are only a matter of time. The prospects for small, handheld laser armaments are not nearly as promising.

"For strategic and tactical weapons, you can store energy on planes, boats or Humvees," said Beason, "but unless a super-source of energy is invented, you may never be able to do it with handheld weapons."

In theory, advances in battery technology eventually could make such weapons possible. But even if they do, the weapons may not fire the bright green or red beams sci-fi fans might expect.

Most research into laser weapons that are intended to scorch targets makes use of non-visible wavelengths of light. These wavelengths propagate through the atmosphere much more efficiently than visible light does.

The reason a visible light beam shows up is that particles along its path scatter photons into the eyes of an observer. (Think of a flashlight beam in fog versus the same beam on a clear night.) "Anytime you can see a beam, that means light is being scattered in some way," said Beason. That, in turn, means less energy reaching the target.

Visible light also can energize gases in the atmosphere to the point of forming plasmas, further cutting into transmission efficiency, and making the chances of colorful firefights between space marines and alien hordes even more unlikely.

Another bummer for a segment of sci-fi fans: Those distinct bars of laser energy that shoot like bullets in "Star Wars"?  They are impossible, Beason said. A burst of laser light moves too fast from its source for our eyes to track as a unit. Many lasers actually consist of pulsed light, but the pulses flash by so quickly that the eye renders them as a continuous beam.

Plausibility Score: Large directed-energy weapons aboard vehicles looks inevitable, but trying to develop hand-held lasers that torch things and people sci-fi style would give physicists and engineers a real workout. Laser cannons seem quite possible, earning them three out of a possible four Rocketboys.