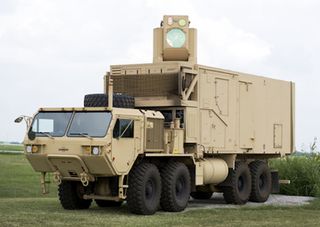 For the U.S. military, laser guns aren't sci-fi tech; they're a reality.

In its most recent test, a 10-kilowatt laser gun developed by Boeing for the U.S. Army shot down more than 150 drones, rockets and other mock enemy targets, according to Boeing officials. Known as the High Energy Laser Mobile Demonstrator (HEL MD), the weapon uses directed beams of energy to destroy its targets in midair.

To destroy an incoming small bomb or mortar round, the laser shoots it with a beam of energy that measures less than an inch (2.5 centimeters) across, according to Barry Crow, a Boeing engineer who works on the HEL MD project. This dime-size beam can hit a target that is miles away. [7 Technologies That Transformed Warfare]

"When we put that really tight spot on [a] mortar, for example, you could think of that as being almost like a butane torch that's been brought to a really fine, tight flame. And you're literally applying it right to the surface of the mortar," Stephanie Blount, another Boeing HEL MD engineer, said in a recent video posted on the company's website. It doesn't take long for the surface of the mortar to get so hot that the high-energy explosives it contains begin to detonate, she added.

The laser weapon can be mounted atop an armored vehicle, according to Boeing. The plan is to one day deploy a few of these mobile lasers together and position them to defend troops on the ground from incoming enemy missiles, mortars and other projectiles. Three HEL MDs, strategically placed, could defend an entire battalion against a small artillery fire, according to Boeing.

Before it shoots down its targets, however, the laser has to locate and track them, which is not an entirely automatic process. Operators inside the armored vehicle help the laser track targets using a video game controller, according to Boeing.

'[It's] something that they can just pick up, and it feels natural to them," Crow said in the video. Once a target is located, it can be destroyed within seconds, at which point the gun moves on to the next target and keeps firing.

But Boeing engineers aren't just excited about the tool's speed and precision; they also like its price. In fact, the only costs associated with operating the laser are the cost of running the onboard electrical equipment and the price of diesel fuel to drive the armored vehicle, according to Boeing.

"Not only is this system very high-tech, but it's also very cost-effective," Blount said. "And it's very hard to find the solutions that have all of the high tech pushing the state-of-the-art capability, which are also the most cost-effective solutions."