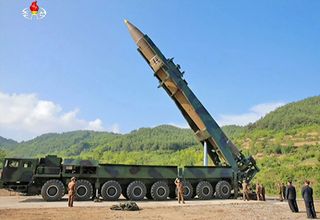 North Korea's latest missile test has brought simmering tensions between the notoriously reclusive country and the United States to a head. But are fears of nuclear war premature? Are North Korean rockets capable of reaching American shores?

It's possible, according to John Schilling, an American aerospace engineer and North Korea analyst.

Schilling, whose experience includes developing rockets for the U.S. Air Force, said the latest North Korean missile is the first with sufficient range and payload capacity to deliver a single nuclear warhead into United States territory. [North Korea: A Hermit Country from Above (Photos)]

The July 4 test launch was "definitely unprecedented," Schilling told Live Science. "They've used bits of technology that they've been testing in smaller missiles, but this is the first time they've tested a missile of this scale."

Schilling is a consultant for 38 North, a website devoted to expert analysis of North Korea, run by the US-Korea Institute at the Johns Hopkins School of Advanced International Studies in Washington, D.C.

The North Korean news agency KCNA broadcast a video of the launch and reported that the missile reached a maximum altitude of 1,741 miles (2,802 kilometers) and flew for 39 minutes before it impacted in the Sea of Japan "more than 930 km" (580 miles) from its launch site near Kusong, in the northwest of the country.

In a blog post, David Wright, director of the Global Security Program for the Union of Concerned Scientists, estimated that the new missile has a theoretical maximum range of around 4,160 miles (6,700 km) from launch sites in North Korea.

"In its present form, it couldn't reach much farther than Alaska or maybe Hawaii," Schilling said, "but we think it can be fairly easily extended to cover the West Coast of the United States."

There can be little doubt about North Korea's intended targets for its missiles — the country's state media regularly issues dire warnings to South Korea, Japan and the United States, which it accuses of meddling in Korean affairs. [7 Technologies That Transformed Warfare]

"I expect they will eventually try to develop something bigger to cover the entire United States, but would expect this one to go into service as a weapon, at least in the near term, over the next year or two," Schilling said.

That means North Korea is on the verge of creating a truly intercontinental nuclear threat: "Missiles of this scale are almost always equipped with nuclear warheads," he said. "It's just not cost-effective with anything less."

Schilling estimated that North Korea could have around 20 nuclear warheads that could be used on such a missile, "but there is substantial uncertainty on that," he said.

He also noted that, unlike earlier North Korean missiles, the Hwasong-14 intercontinental ballistic missile (ICBM) that was tested earlier this month is fitted with a payload shroud, which hides the payload from external view.

"That sort of design suggests that they're planning on incorporating decoys, in addition to just a single warhead — but that would be several years down the road, requiring additional development and testing," Schilling said.

North Korea's nuclear missile program is made possible by a massive commitment of money and resources, reported the Washington Post, even though the country is thought to be one of the poorest in the world, and where inhabitants endure frequent power outages and shortages of basic supplies.

Schilling said each rocket based on the Hwasong-14 would probably costs tens of millions of dollars to build, and the North Koreans are expected to put several such rockets into service over the next few years.

"We think this is a home-grown design." Schilling said. "Getting to this stage over the last 20 years has involved some foreign collaboration, but at this point, we think that they've taken the training wheels off, and they're doing this on their own, with just an incredibly focused effort from a relatively poor nation."

Schilling said North Korea still faces many engineering challenges before the Hwasong-14 can be an effective weapon, particularly when it comes to ensuring that the missiles can function under the haste and uncertainty of combat conditions.

"We are actually surprised that this one worked at all — their missiles rarely work on the first try," he said.

Developing precise guidance systems for the missiles would be another challenge: "They've done launches which suggest they have guidance technology that would at least be accurate enough to hit city-sized targets," Schilling said. "Anything more precise than that would probably require a great deal of testing to calibrate the guidance systems."

The next stages of North Korea's missile development will probably only be known when it tests another missile. And only North Korea knows when that may be.

"That's hard to read," Schilling said. "They may just consider this success to be sufficient for the moment, and not risk embarrassing themselves with a failure."