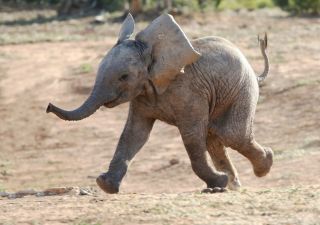 Even though the animal kingdom's biggest bodies sport the most powerful muscles, those bodies don't move the fastest.
(Image: © Four Oaks/Shutterstock)

Bigger bodies mean larger, more powerful muscles, so there was no clear reason for this rule — after all, why shouldn't larger animals use their power advantage for speed?

Now, scientists have discovered a mathematical reason: According to new research, the largest animals are limited by how much energy they can mobilize to accelerate.

"By the time large animals get up to higher speeds while sprinting, their rapidly available energy reserves also soon run out," said study leader Myriam Hirt, a zoologist at the German Center for Integrative Biodiversity Research, in Leipzig. [The 9 Fastest Animals in the World]

Hirt became interested in understanding the relationship between size and speed while working on a project that required her to estimate animal maximum speeds. Traditional methods of estimating speed based on body size resulted in absurd numbers for the largest animals. For elephants, for example, the calculation came out to a max speed of 373 mph (600 km/h), she told Live Science. Elephants actually run at a maximum speed of 21 mph (34 km/h).

Hirt was far from the first to notice that the largest land animals aren't very speedy. But as she did more digging, she realized that the pattern held for flying animals and swimmers, too.

"This made me realize that the underlying mechanism had to be a very general principle," she said.

Hirt built a mathematical model to explain this mechanism. Animals reach their maximum running speeds over short sprints, not long distances, she said. Short sprints are powered anaerobically, meaning the fuel that powers the muscles comes from short-term storage and is limited. (Aerobic metabolism, which resupplies the muscles with fuel made with the help of oxygen, powers longer exertions.)

Mass has to overcome inertia for an animal to move, Hirt said, so an elephant can't burst into a sprint as quickly as a mouse can. By the time the elephant gets going, it's already used a good amount of its anaerobic energy stores. As a result, the largest animals never reach the theoretical running speeds that their muscle size might suggest is possible, Hirt reported today (July 17) in the journal Nature Ecology & Evolution.

The relationship between body mass and speed is hump-shaped: Speed increases with body size up to a point, and then declines as body size outpaces energy availability.

Hirt tested her model against a database of 474 species across the animal kingdom. She found that it predicted maximum speeds with nearly 90 percent accuracy across runners, swimmers and flyers. The 10 percent left to explain could be attributed to a variety of issues, such as measurement error, species-specific body adaptations and an animal's source of heat — whether an animal is endothermic (warm-blooded) or ectothermic (cold-blooded), Hirt said.

Endothermic animals on land are slightly faster than ectothermic animals, simply because endothermic animals can be active regardless of the outside temperature. Oddly, that pattern is reversed in the water: Cold-blooded creatures are actually faster than warm-blooded ones. This is probably because the ocean's warm-blooded creatures, like penguins and whales, either spend some time on land or have a land-based ancestor, Hirt said. Those animals have probably evolved some trade-offs that make them slightly slower in the water, she said.

Although humans are a bit slower, on average, than Hirt's formula predicts, Usain Bolt— the record holder for the 100- and 200-meter sprints — fits the data well, Hirt said. That's probably because humans don't have the types of adaptations that help make cheetahs so quick, like ultraflexible spines and joints.

The new speed formula could come in handy for future research involving animal movement and migration, as well as predator-prey interactions, Hirt said. It also could be used to better pinpoint how fast extinct animals could move. According to Hirt's calculations, Velociraptor probably sped along at a max speed of 34 mph (54.5 km/h), T. rex could kick it into gear at up to 17 mph (27 km/h) and Brachiosaurus lumbered along at 7 mph (11.9 km/h) at its swiftest.