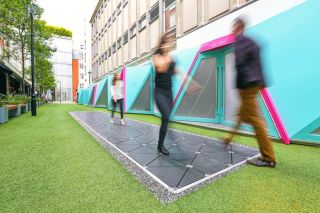 This'll put a spring in your step — interactive tiles in London convert a sidewalk stroll into energy.
(Image: © Courtesy of Pavegen)

Could city sidewalks one day generate the energy that powers streetlights? An interactive installation in London is taking the first steps toward that futuristic idea, by lining a little-used lane with interactive tiles, to transform it into an energy-harvesting "smart street."

The project launched June 29 on Bird Street, a quiet and relatively traffic-free road adjacent to Oxford Street in London's West End neighborhood, according to a statement released by Pavegen, the company that produced the interactive street tiles.

When visitors amble down Bird Street, now closed to traffic, a tiled path down the center of the street captures energy from their steps and generates power to trigger soundscapes of chirping birds and nighttime light displays along the avenue. Other technological innovations included in the installation: a seating area that doubles as an air purifier and surfaces covered in special paint that absorbs nitrogen oxide gas present in fossil fuel emissions, Pavegen representatives said in the statement. [10 Technologies That Will Transform Your Life]

Energy produced by the tiled array, which measures about 108 square feet (10 square meters), also powers low-energy Bluetooth transmitters embedded in the pathway. The transmitters interact with apps that provide walkers with data about steps taken and how much energy those steps produce; their steps also deliver vouchers and discounts for a variety of pop-up shops along the street, according to the statement.

Visitors can also get a breath of fresh air on a "CleanAir Bench" built by Airlabs, a design company addressing air pollution in urban environments. Eight fans inside the bench draw in polluted air, which the bench then processes internally to remove up to 95 percent of nitrogen dioxide — an urban pollutant. The bench then "exhales" clean air for seated users to enjoy, according to a description on the Airlabs website.

The "smart street" debut followed the unveiling of a new initiative to make London a leading "smart city" by using cutting-edge technology to address social, economic and environmental challenges, Mayor of London Sadiq Khan announced June 12 in a statement. Khan further described plans to advance London as a global innovator by appointing the city's first Chief Digital Officer, who will oversee the development of smart city tech, the mayor's representatives said in the statement.

"From air pollution and climate change to housing and transport, new technologies and data science will be at the heart of the long-term solutions to urban challenges," Khan said.