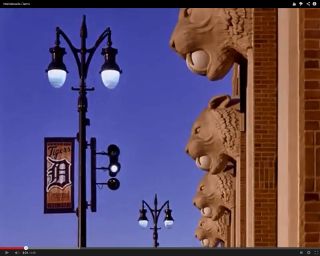 Intellistreet lamps have the ability to capture video and audio of street scenes.
(Image: © YouTube screengrab from Intellistreets.)

They look like ordinary streetlights, shining down on Las Vegas sidewalks after the sun has set. But Sin City's new streetlights have a few special capabilities that have civil libertarians up in arms.

The city is installing Intellistreets, a brand of street lighting that is capable of recording video and audio of pedestrians and motorists. What happens in Vegas, it seems, no longer stays in Vegas.

"We want to develop more than just the street lighting component. We want to develop an experience for the people who come downtown," Neil Rohleder of the Public Works Department told NBC News affiliate KSNV. The lamps are equipped with large video monitors that display ads or other messages, and speakers that broadcast music or voice messages. [10 Technologies That Will Transform Your Life]

But people like civil liberties advocate Daphne Lee have concerns that Big Brother is watching — and recording. "This technology is taking us to a place where you'll essentially be monitored from the moment you leave your home until the moment you get home," Lee told KSNV.

Although Illuminating Concepts, the Farmington Hills, Mich.-based company that developed Intellistreets, does make streetlights with video and audio recording capabilities, those features will not be present on the lamps in Las Vegas, according to city officials.

"Right now, our intention is not to have any cameras or recording devices … it's just to provide output out there, not to get any feed or video feed coming back," Las Vegas public works director Jorge Cervantes told KSNV.

Similar streetlights have been installed in a handful of European cities. In Middlesbrough, England, lamps equipped with a full suite of monitoring equipment were installed in 2006. When monitoring operators saw a cyclist riding his bicycle through a crowded pedestrian area, they broadcast a message over the loudspeaker: "Would the young man on the bike please get off and walk, as he is riding in a pedestrian area?"

The admonished young man shamefacedly dismounted and walked his bicycle as instructed, according to the Daily Mail. Among people disturbed by anti-social behavior — biking on sidewalks, littering, fist fighting — the smart streetlights are a big hit. "Put it this way: We never have requests to remove them," manager Jack Bonner told the Mail.

Intellistreets lamps operate over a Wi-Fi network that's linked to a central server; each lamp can be individually controlled. The LED lights, remote dimming controls and other energy-saving features of the streetlamps can cut electricity use by 70 percent, according to the manufacturer. They can also be equipped with pollution monitors, emergency call buttons and optical recognition software.

And in the event of an emergency, Intellistreets can provide useful information, such as Amber Alerts, threats including natural disasters or chemical spills, real-time evacuation procedures and other security concerns through visual monitors and audio messages.

In addition to Las Vegas, Intellistreets have been installed at the Mercedes-Benz Superdome in New Orleans, Sony Pictures in Culver City, Calif., and the Navy Pier in Chicago.

Illuminating Concepts founder Ron Harwood told CBS Detroit that the Intellistreets system was "born in the parks of Disney and Universal," where "imagineers" (engineers working in design and development) needed an integrated network that could guide large crowds while also giving them information in an emergency.

Nonetheless, in an era where security watchdogs at the National Security Agency are spying on everyone from heads of state to their girlfriends, some are raising concerns that a streetlight that can watch and listen to your conversations is more than a little unsettling.

"At what point do we say, 'this is the land of the free,'" Lee told KSNV. "People have a right to a reasonable amount of privacy."