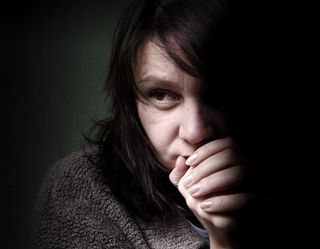 In a week of revelations about secret government surveillance of phones and Internet activity, you might find yourself looking over your shoulder a little bit more often than usual. You're not alone, research suggests.

In fact, paranoid thoughts are relatively common among otherwise healthy people, according to a new study published this month in the British Journal of Psychiatry.

"A little bit of paranoia might be quite helpful," said study researcher Paul Bebbington, an emeritus professor of mental health at University College London. When paranoid thoughts take over, it can be a mental disorder. But wariness and mistrust are not unusual, Bebbington said. In fact, they're often protective, preventing people from, for example, blurting out their life's secrets to total strangers.

"Everybody's a little bit wary in meeting somebody new," Bebbington told LiveScience. "In that sense, it's sort of adaptive."

Bebbington is part of a group of researchers working to develop talk-based therapies for psychosis, which psychiatrists define as disorders that impair people's grasp on reality. Paranoia is frequently a major component of psychosis. Paranoid people typically feel persecuted and mistrustful, and may have delusions of self-importance (for example, that the government is specifically out to get them). [The 10 Most Stigmatized Mental Health Disorders]

To understand paranoia, Bebbington and his colleagues turned to a national survey of mental health called the British National Psychiatric Morbidity Survey. This iteration of the survey, carried out in 2000, included questions on paranoid beliefs. In total, an 8,576-person representative sample of the British population participated.

The participants were asked questions designed to uncover four separate types of paranoid thought. The first, interpersonal sensitivities, gets at people's paranoia in one-on-one interactions. A person high in interpersonal sensitivity might worry frequently about criticism and rejection in social situations, avoid those who might reject them and believe they're not as good as other people.

The next category, mistrust, is marked by difficulty being open even with close friends, worries about trusting family and coworkers, and anxiety about being hurt or used. Participants were also asked about "ideas of reference," or fears that people are talking about them, secretly insulting them or watching them.

Finally, the last category, "ideas of persecution," dealt with beliefs that others might be "out to get" the participant, deliberately trying to harm them.

The results revealed a "sort of beautiful" curve in the trend of paranoia, Bebbington said. At one end of this curve were most people, who reported having a few paranoid thoughts but not very many. At the other end were the paranoid — there weren't many of them, but they held nearly all of the paranoid beliefs asked about in the study.

About 11.9 percent of the population fell into a group the researchers dubbed the "persecutory class." These people felt strongly that they were the targets of ill will, with 75 percent of this group saying others were out to get them and 15 percent claiming that others were actively plotting to harm them.

At the less extreme ends, 33 percent of the population fell into the "interpersonal sensitivity" group. These people were highly anxious about interpersonal interactions and worried a lot about rejection. They also had moderate levels of mistrust.

Another 28.6 percent of people were in the "mistrust" group. As might be expected, these people had trouble trusting others, but were less interpersonally sensitive than the first group. Finally, about 29 percent fell into the "quasi-normal" group. These people were low on all paranoid thoughts, answering yes to only about 10 percent to 20 percent of the questions on paranoid feelings.

In other words, Bebbington said, paranoia is a continuum. A similar continuum has been found with mood disorders — people range from morose to painfully cheerful — but it was a surprise to see the same continuum appear in paranoid beliefs, Bebbington said.

"It looked like the most paranoid people were experiencing accumulation of the individual threads in paranoia, which is theoretically quite neat," he said.

Understanding paranoia as a continuum can help psychiatrists develop therapy for reaching paranoid patients, Bebbington said. The findings might also lessen the stigma of psychotic disorders if people understand that even "normal" people have paranoid thoughts, he said.

"Some unusual experiences and unusual beliefs are quite widespread," Bebbington said. "People who are diagnosed as having psychosis have a bit more of those things than people who wouldn't be diagnosed."