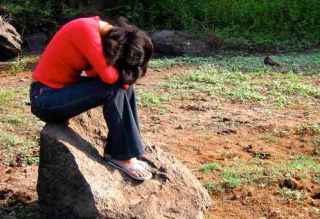 That pain you feel after being rejected by a loved one is real, scientists find.
(Image: © Dreamstime)

Rejection quite literally hurts — the experience and the memory of getting dumped by a loved one trigger brain regions linked with physical sensations of pain, scientists find.

Around the world, people for centuries have used the same language — words like "hurt" and "pain" — to describe mental suffering as well as physical suffering, leading researchers to wonder if the sensations weren't activating the same parts of the brain.

Speculatively, it makes sense that getting your heart broken  could feel like something literally breaking. During the course of human evolution, rejection from a group could leave one extraordinarily vulnerable, researcher Edward Smith, a cognitive neuroscientist at Columbia University in New York, told LiveScience, "so that might be why this link evolved between rejection and pain, to make us want to avoid rejection."

Past research had not found much to suggest rejection triggered pain areas in the brain. However, those studies had attempted to elicit feelings of rejection in test subjects by telling them they had been excluded from a computer game, for instance, or that anonymous feedback suggested a stranger did not like them —  examples that might trigger only tepid feelings of rejection. "We wanted something bigger," Smith said.

Smith and his colleagues put out fliers in Manhattan and online ads on Facebook and Craigslist looking for people who had been through an unwanted breakup of a romance in the last six months. As the brains of the 40 volunteers were scanned through functional magnetic resonance imaging (fMRI), half the time they looked at photos of their ex, and half the time they looked at photos of a friend. During both situations, participants were asked to focus on experiences they shared with the people in the pictures.

For comparison to their response to physical discomfort, the participants also had probes placed on their forearms that could get painfully hot.

The scientists found that parts of the brain linked with physical pain also lit up when individuals were remembering bad breakups.

The researchers are now looking at possible techniques for easing such mental suffering, including methods that therapists already use. "For instance, one piece of advice when thinking about rejection is to view experiences with an ex-partner as an outside person from a distance," Smith said. "We want to see if this really does help at the level of the brain."

Smith didn't recommend taking an aspirin for such pain. "An hour later, you might just start thinking of that person again," he said.

The scientists detailed their findings online today (March 28) in the journal Proceedings of the National Academy of Sciences.