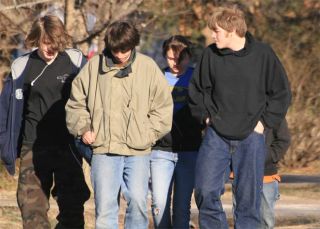 The ability to spot a fabricated smile, exhibited by test subjects who had suffered rejection, could be a relic of our past, the researchers said.

"This seems to be a skill we've acquired through evolution," said researcher Michael Bernstein, a doctoral student in social psychology at Miami University in Ohio. "Living in groups several hundreds of years ago was extremely important to survival. Being kicked out of the group was like death, so they became very good at reading facial expressions and social cues."

A similar, albeit perhaps less lethal, threat occurs when you get knocked out of a clique at school or in the office. In fact, past research has shown social exclusion can make a person cold, literally. And another study revealed that loneliness, at least in older adults, is linked with high blood pressure.

"People these days who are rejected are in a dangerous place because of evolutional pressure to find their way back into a group," Bernstein said.

Bernstein and his colleagues, including MU psychologist Heather Claypool, studied this phenomenon in 32 individuals, about evenly split between men and women. The researchers had some individuals write about a time when they felt excluded or rejected, while others wrote about a time they felt accepted, and the control group just wrote about what happened yesterday.

Rejected stories included breaking up with a partner and not being called when your friends go out. A football player who had been injured wrote how he could no longer play and felt his football friends didn't associate with him as much.

The participants then watched 20 quick videos showing a person with either a fake or real smile.

The results showed that those primed to feel rejection distinguished the fake smiles nearly 80 percent of the time, compared with about 60 percent for the accepted and control individuals.

Turns out, the eyes might hold the clues for bogus versus genuine smiles.

"We think that rejected people are probably looking harder at these faces, and they may actually be looking at better spots on the face," Bernstein told LiveScience. He added that rejected participants may have focused more on the smiling person's eyes.

"A real smile is not shown in the mouth; it's shown in the eyes," he said. "There are muscles around the eyes that are indicative of a real smile, whereas a fake smile just requires the mouth muscles."

The results were surprising to some of the researchers, who thought rejection would cause individuals to cling to any inkling of camaraderie. Rather, getting the boot from a group makes a person that much more savvy when it comes to entering another one.

"Some thought the subjects who had been rejected would latch on to any sign of positivity and accept the insincere smiles as genuine," Bernstein said. "But it's clear we're equipped with radar for identifying who is open to affiliation and who is not."

The research is detailed in the October issue of the journal Psychological Science.