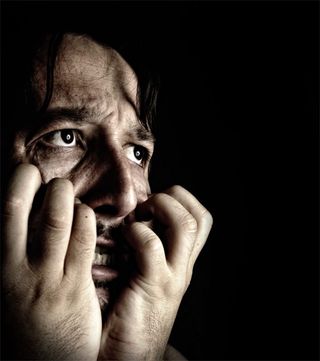 A psychological disorder called koro has mainly men hysterical about their genitals shrinking or retracting into their body, often believing a brush past a stranger caused the penis loss.
(Image: © Zurijeta | Shutterstock)

In a recent issue of "Pacific Standard" magazine, Louisa Lombard, an anthropologist at the University of California at Berkeley, described visiting a small town in the Central African Republic where she encountered two men who claimed that their penises had been stolen.

It seems that the day before, a traveler visiting the town had shaken hands with a tea vendor who immediately claimed he felt a shock and sensed that his penis had shrunk. He cried out in alarm, gathering a crowd, and a second man then said it also happened to him.

This is not the setup to a joke; it is a real psychological disorder called koro in which victims (mostly men, but sometimes women) come to believe that their genitals are shrinking or retracting into the body. The concern is not only for their sexuality, but also for their lives, since they believe that the condition may be life threatening if not reversed. In order to prevent further shrinkage, victims have been known to securely tie their penises with string or metal clamps — even sometimes having family members hold it in relays until treatment can be sought, usually from shamen or traditional healers.

The condition has most often been found in Africa in recent decades, though it has also been widely reported in Asia. [The 9 Most Bizarre Medical Conditions]

"In recent years, news media in several West African countries have reported periodic episodes of 'panic' in which men and women are beaten, sometimes to death, after being accused of causing penises, breasts, and vaginas to shrink or disappear," wrote Vivian Dzokoto and Glenn Adams in a study published in 2005 in the journal Culture, Medicine and Psychiatry. "At least 56 separate cases of genital shrinking, disappearance, and snatching have been reported in the last seven years [1998-2005] by news media of seven West African countries."

Victims of koro usually believe that a touch or "accidental" brush with a stranger caused the theft, in the same way that a pickpocket might steal a wallet.Dzokotoand Adams give one example of a 17-year-old man in Ghana who "claimed that he had gone to fetch water for his father and was returning when [the perpetrator] came behind him, touched him and immediately he felt his penis shrink until it was no longer visible."

Koro can be understood in a variety of ways; from a psychological perspective it can be seen as an example of mass hysteria or delusion, in which a collective cultural belief can be manifested in one person's experience — whether objectively "real" or not.

"Victims of genitalia-shrinking panics recover within hours or days after being convinced that the 'illness' is over or never existed, and most clearly lack any psychosexual problems," write sociologist Robert Bartholomew and myself, in the book "Hoaxes, Myths, and Mania: Why We Need Critical Thinking" (Prometheus Books, 2003).

"Penis-shrinking panics are a timely reminder that no one is immune from mass delusions and that the influence of culture and society on individual behavior is far greater than most of us would like to admit. Yet the main reason for the absence of penis-shrinking epidemics in Western societies is their incredible nature ... but any delusion is possible if the false belief underlying it is plausible." [Americans' Belief in Paranormal Phenomena (Infographic)]

In this case the delusion is made possible by the underlying belief in witchcraft, or black magic. A 2010 Gallup poll found that belief in magic is widespread throughout sub-Saharan Africa, with over half of respondents saying they personally believe in witchcraft. Studies in 18 countries in sub-Saharan Africa show belief varies widely, but on average 55 percent of people polled believe in witchcraft.Because most Westerners do not believe in magic — or at least not in the variety that has the potential to shrink or steal someone's genitals — there is no underlying belief system that would make koro plausible and thus no one reports it.

No one has ever died from koro, at least not directly. Belief in koro can have deadly consequences: hundreds of people have been accused of stealing (or shrinking) other people's genitals, and dozens have been killed for the accusations. In many cases koro "victims" have shouted and asked bystanders to help apprehend the penis thief, whereupon the accused people — often as surprised as everyone else and protesting their innocence — have been lynched on the spot by street mobs, much the way an accused mugger or rapist might be set upon by "street justice."

Benjamin Radford is deputy editor of "Skeptical Inquirer" science magazine and author of six books, including "Media Mythmakers: How Journalists, Activists, and Advertisers Mislead Us." His website is www.BenjaminRadford.com.