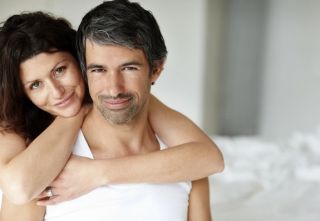 Women who have vaginal orgasms say they climax more easily if their man has a longer penis.
(Image: © Yuri Arcurs, Shutterstock)

Contrary to the reassuring catchphrase "size doesn't matter," penis size may matter in bed — but only for some women, and for certain types of orgasms.

A new study finds that women who have frequent vaginal orgasms are more likely than other women to say they climax more easily with men with larger penises. Women who tend to prefer penile-vaginal intercourse over other types of sex also say the same, researchers reported online Sept. 24 in The Journal of Sexual Medicine.

"Male anxiety about penis size may not reflect internalized, culturally arbitrary masculine stereotypes, but an accurate appreciation that size matters to many women — just as men feel legitimate anxiety when they enter the mating market about their intelligence, personality traits, sense of humor, social status, height, wealth, and other traits known to be favored by women across cultures," study researcher Stuart Brody, a psychologist at the University of the West of Scotland, told LiveScience.

But other researchers were less convinced.

"There's such variability in preference," said Barry Komisaruk, who researches female sexual response at Rutgers University. Women who orgasm through vaginal stimulation may indeed prefer longer penises, Komisaruk told LiveScience, but not everyone prefers to orgasm that way. [10 Odd Facts About the Female Body]

"There are so many different factors," said Komisaruk, who was not involved in Brody's study. "Once it gets to the kind of specifics that they're talking about, I get wary."

Both penis size and female orgasm are hot-button topics. There is still scientific debate about whether vaginal and clitoral orgasms are different phenomena. Different nerves carry signals from the vagina and from the clitoris, Komisaruk said, and stimulation of each activates different brain regions. But some researchers argue that vaginal stimulation is simply activating a different, internal, section of the clitoris. Women report different sensations from vaginal and clitoral orgasms, Komisaruk said, but which one women prefer largely comes down to personal preference.

In some cases, female orgasm is even more complex. For example, Beverly Whipple, professor emerita at Rutgers University and one of the discoverers of the G spot, a sensitive area felt through the front wall of the vagina, has found that women with complete spinal cord injuries can sometimes experience orgasm, even though the nerves that carry sensation up the spinal cord from the pelvis have been severed. It's likely that the sensory vagus nerve, which runs in the abdomen but bypasses the spinal cord, is recruited to carry signals to the brain in these cases, Whipple told LiveScience.

Other research has found that abdominal exercises induce orgasm in some women, resulting in pleasurable spasms at the gym.

"Earlier research with a large representative sample also found that women who are made aware in their youth that the vagina is a source of women's orgasm are more likely to develop the capacity for vaginal orgasm. Therefore, those who deny these findings (and insist on maintaining the politically correct party line) are not doing women a favor, but might be injuring women's health and sexual potential," Brody wrote in an email to LiveScience.

In the new study, Brody and his colleagues asked 323 women, mostly Scottish university students, to recall past sexual encounters. They were asked about their recent sexual behaviors as well as how important penile-vaginal intercourse and other sex acts were to them. They were also asked whether penis length influenced their ability to orgasm with vaginal stimulation.

Defining "average" as the length of a 20-pound banknote or U.S. dollar bill, which are 5.8 inches (14.9 cm) and 6.1 inches (15.5 cm) long, respectively, the researchers asked women if they were more likely to orgasm vaginally with a longer-than-average or shorter-than-average penis. [Macho Man: 10 Wild Facts About His Body]

They found that 160 of the women experienced vaginal-only orgasms and had enough sexual partners to compare size experiences. Of these, 33.8 percent preferred longer-than-average penises, 60 percent said size made no difference and 6.3 percent said longer was less pleasurable than shorter.

Supporting the hypothesis that size matters, Brody and his colleagues found the women who reported the highest number of vaginal orgasms in the past month were most likely to say that longer was better.

"This might be due at least in part to greater ability of a longer penis to stimulate the entire length of the vagina, and the cervix," Brody said.

The data supports Brody's claim, Whipple said, but the sample is limited to Scottish university students and should be replicated with a broader group. Nevertheless, she warned against worrying about the findings in bed.

"To me, all of this is just so goal-oriented, and it's difficult for me to see researchers setting up another goal [vaginal orgasm] for women to experience," Whipple said.

Whipple argued that sexuality is healthier when focused on the pleasure of acts from cuddling to kissing to other sexual sensations rather than the goal of reaching orgasm.

"I recommend for women to learn about themselves, learn about their body, find what they find pleasurable and enjoy that, as long as it's not exploiting another person," she said.