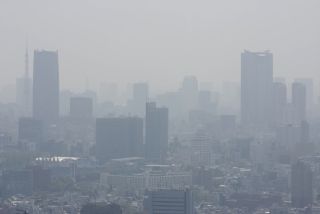 An undated photo of smog over the city of Tokyo.
(Image: © Doctor Jools, Shutterstock)

ATLANTA — Air pollution is one human-made factor that is trapping sunlight and causing climate change, but the relationship also goes the other way: Climate change stands to increase levels of air pollution, experts say.

Although climate change is multifaceted, and won't bring warmer temperatures to all parts of the globe, the average global temperatures will rise.

Research shows that "a warming climate will lead to more severe air pollution," and that this holds true even if the only factor that changes is temperature, said Patrick Kinney, a professor of urban health and sustainability at the Boston University School of Public Health. Kinney's research group has looked into how temperature and air pollution are related. [5 Ways Climate Change Will Affect Your Health]

"While we've been damaging the Earth's climate system … we've also been damaging our own health in the process," Kinney said, speaking here today (Feb. 16) at the Climate & Health Meeting, a gathering of experts from public health organizations, universities and advocacy groups that focused on the health impacts of climate change.

"It's a sword that cuts with two very deadly edges, both for climate and for health," Kinney said.

But air pollution doesn't come only from the obvious human sources, such as cars and factories. Other sources, such as burning forests, also contribute to air pollution, and these factors are also related to climate change, Kinney said. Higher temperatures draw moisture out of the soil and into the air; this dries out the soil and, in turn, dries out the vegetation, making it more vulnerable to wildfires, he explained.

The smoke from wildfires remains in the air for a long time and can travel long distances, Kinney said. This type of air pollution kills nearly half a million people prematurely every year, worldwide, he said.

Whether it's the burning of wood or the burning of coal, researchers say the pollutants that are released into the air have similar health effects, Kinney noted.

And the negative health effects of air pollution go beyond a scratchy throat or a nagging cough.

Major health consequences of exposure to air pollution include an increased risk for heart disease and lung cancer, Kinney told Live Science. Air pollution is composed of tiny particles that "act very similarly to cigarette smoke," he said. "We know a lot about how cigarette smoke can cause [health] problems; air pollution is doing the same thing," he added. [8 Ways Global Warming is Already Changing the World]

The links between air pollution and both heart disease and lung cancer may not be obvious to many people because these conditions develop over many years, Kinney said. These links are "more pernicious," he said, adding that the evidence for them has "emerged through careful studies of large populations of people."

The finding that climate change can play a role in increasing air pollution means that air pollution will be "more difficult to control in the future than we thought," Kinney said.

"The fact that we do have clean air [today] is because of the great work that the Environmental Protection Agency has been doing for the last 40 years," Kinney added.

But the link isn't simply that a warmer climate means a longer pollen season. In addition to the longer season, increased levels of carbon dioxide in the air cause plants to produce more pollen, Kinney said.