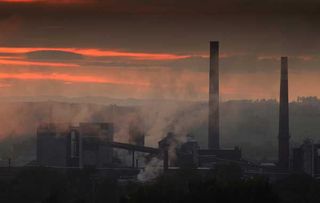 Air pollution sets off nearly as many heart attacks as physical exertion, alcohol or coffee, a new review has found.

The results show that air pollution can harm not only the lungs, but the heart , said Dr. Andrea Baccarelli, an associate professor of public health at Harvard School of Public Health in Boston, who wrote an editorial accompanying the study online today (Feb. 23) in the journal Lancet.

"It is just a moderate risk factor, but because everyone is exposed to air pollution, it becomes very important on the community level," Baccarelli told MyHealthNewsDaily.

Heavy particles, inflammation and clotting are all hazards to the heart presented by air pollution, he said.

They took into account how much the general population is exposed to each risk factor. For example, cocaine use increases a person's heart attack risk by 23 times, but because so few people use the drug, it accounts for only 0.9 percent of heart attacks, according to the review.

They found that air pollution increased a person's heart attack risk by 5 percent. But because all the people in the studies were exposed to air pollution, its role in the risk for the general population is higher than some other factors, Baccarelli said.

The analysis also showed that drinking coffee increases a person's heart attack risk by 1.5 times, and drinking alcohol increases risk by three times, but more people are exposed to air pollution than drink coffee or alcohol.

It's no surprise that air pollution has adverse effects on the heart, Baccarelli said. There are a number of ways heavy particles in the air, which come largely from traffic, and other pollutants can wind up affecting our bodies, he said.

Heavy particles from pollution can enter the lungs and bloodstream, allowing them to travel to the heart and increase heart disease risk, Baccarelli said.

Pass it on: Air pollution accounts for about the same number of heart attacks as physical exertion, alcohol and coffee.