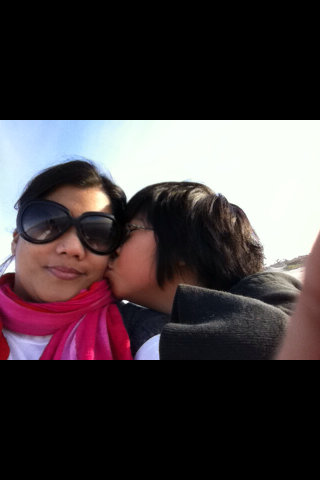 Before Alane Basco-Yu gave birth to her first child in 1998, she seemed to be in perfect health. At age 22, she ran and had a black belt in Tae Kwon Do. But shortly before her son was due, she had difficulty breathing and was diagnosed with heart disease.

"I had no symptoms" before the pregnancy, Basco-Yu said. "When I was younger, I occasionally had difficulty breathing," but doctors wrote it off as exercised-induced asthma or allergies.

One of her heart valves could not open properly, hindering blood flow through the heart. The valve was scarred when she had untreated rheumatic fever as a child. She needed surgery, but her doctors thought it too risky to operate until after the baby was born. At delivery, Basco-Yu went into heart failure, meaning her heart couldn't pump enough blood for her body.

"They gave me a 5- to 10-percent chance of dying at delivery," said Basco-Yu, who is now 35. Before her diagnosis, heart disease was not on her mind. "They gave all this news to me my eighth month of pregnancy."

Heart disease is often stereotyped as a condition that afflicts men. But for the past three decades, more women in the United States have died from it than men, according to the American Heart Association (AHA). And while the risk generally increases with age, it can strike young women as well, especially during pregnancy.

Making matters worse, young women may not be concerned about the condition, and may shrug off symptoms they experience, experts say. And like Basco-Yu, they may appear to be in perfect health before they're diagnosed.

Cardiovascular disease, which includes coronary artery disease and stroke, is the No.1 killer of women in the United States. In 2006, more than 430,000 women died from cardiovascular disease, according to the AHA. Although women are more likely to die from heart disease than men, they are less likely to receive care to prevent it, said Dr. Susan Shurin, acting director of the National Heart, Lung and Blood Institute.

A family history of the disease, being African-American, having high blood pressure and cholesterol and being overweight or obese are risk factors for heart disease. [Related: Beyond Vegetables and Exercise: 5 Surprising Ways to Be Heart Healthy]

In comparing the heart disease mortality rates of men and women, the difference is larger in younger age groups, said Dr. Alexandra Lansky, director of the Yale Women’s Heart Center. Among people under 55, women have about twice the mortality rate of men, Lansky said. This difference gets smaller in older people.

One way to raise women's awareness would be to incorporate tests, such as blood pressure checks, into gynecologists' visits, or to perform electrocardiograms during physical exams, said Dr. Elizabeth Ofili, chief of cardiology at the Morehouse School of Medicine in Atlanta. It's important that women in their mid-20s have a physical exam, even if they think they are in good health, and especially if they have a family history of heart disease, Ofili said.

Heart conditions often first appear during pregnancy, as in Basco-Yu's case, because of the strain on a woman's body. The volume of blood increases by almost 50 percent during pregnancy, said Dr. Heidi Connolly, director of the Mayo Clinic Congenital Heart Center.

Heart problems in pregnancy can include high blood pressure or preeclampsia, coronary artery disease and congenital heart diseases present from birth. Together, these diseases affect an estimated 40,000 pregnancies each year, Connolly said.

Identifying heart disease in pregnancy can be a challenge, Connolly said. Some normal experiences, such as shortness of breath, ankle swelling and trouble sleeping can also be symptoms of heart disease. As a result, women may attribute such discomforts to their pregnancy and not go to their doctor until later, Connolly said.

And treating pregnant women without harming the fetus can be tricky. Some doctors lack knowledge about how to do this, and will err on the side of caution, Connolly said.

"They get very anxious about treating a pregnant woman because they're always worried about, what if I injure the baby?" she said. "But the truth is, if the mother doesn’t survive, the baby doesn't survive, either."

Treatments depend on what condition the mother has, and can range from medication to surgery, Connolly said.

In many cases, having a heart condition does not prevent someone from having a child, but the disease needs to be managed. In fact, Basco-Yu had a second child in 2007. This time, her doctors were better able to deal with her symptoms, Basco-Yu said. For instance, they knew she would go into heart failure toward the end of her pregnancy.

To better understand how to treat and manage heart disease in pregnant women, more studies need to include them, Shurin said. Until about 10 to 15 years ago, pregnant women were excluded from trials altogether, she said. While that's recently changed, researchers still don't do as many studies with pregnant women as they should.

"We actually have to focus on women in pregnancy, or we're shooting in the dark," Shurin said.

Today, it can take about eight weeks to recover from a heart surgery that splits the sternum bone. That recovery time may cause women to delay surgeries they feel would get in the way of their family commitments. According to an AHA online survey, the top two reasons women defer heart surgery is "caring for others," and "family responsibilities," said Dr. Rakesh Suri, a consultant in the division of cardiovascular surgery at the Mayo Clinic.

"Women might [be] diagnosed with this condition, but they can't convince themselves that it's in their best interest to put down those responsibilities to take care of themselves" during their recovery, Suri said.

But new, minimally invasive surgeries now allow people to be out of the hospital in about three days and back to their normal routine in a week or two, Suri said. Instead of splitting the sternum, these surgeries use small holes between the ribs to access to the heart. Robotic arms are inserted through the holes, and a high-definition camera shows doctors what they're doing on a video screen. While minimally invasive techniques have been around for about the last decade, this particular type has been offered at Mayo for just the last three years, Suri said.

"We have responded to a need for people to undergo a lifesaving operation but without suffering the detrimental setback to their lives and their functional ability to take care of their jobs or their loved ones or their families," Suri said.

Basco-Yu's operation in 1998 was a type of minimally invasive surgery performed at Duke University Medical Center. A balloon was threaded up to her heart through slits in her thighs. Her recovery time was about four to six weeks, but would likely have been less had she not just given birth, Basco-Yu said.

Basco-Yu was originally told she would need to have her heart valve replaced after six years. But her first surgery was so successful that, 13 years later, she has still not needed the replacement. While she will have to review her surgical options when the time comes, "it does sound like the minimally invasive option would be the best," she said.

Pass it on: Heart disease is the No.1 killer of women in the United States. While older adults are at increased risk, the disease can strike young women as well, especially during pregnancy.