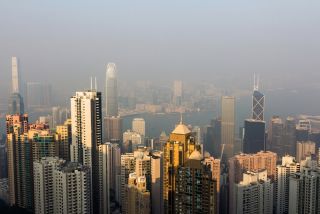 Outdoor air pollution may lead to more than 3 million premature deaths globally per year, according to a new study. About 75 percent of those deaths occur in Asia, the study found.

Air pollutants such as ozone and tiny particles of toxins are linked with heart disease, lung disease and other serious afflictions that have long-term impacts on human health.

"Strokes and heart attacks are responsible for nearly 75 percent of air pollution-related mortality," said the lead author of the study, Jos Lelieveld, an atmospheric scientist at the Max Planck Institute for Chemistry in Germany. A "little over 25 percent is related to respiratory disease and lung cancer."

Calculating the effects of outdoor air pollution on a global scale is challenging. One reason is that air quality is not monitored in some regions, and another is that the toxicity of the particles called "fine particulate matter" can vary greatly depending on their source.

In the new study, Lelieveld and his colleagues estimated the amount of premature mortality from outdoor air pollution by combining models of global atmospheric quality with data from satellites and ground-based networks of sensors, as well as population data, health statistics and other research from public health experts. [10 of the Most Polluted Places on Earth]

Of the seven sources of outdoor air pollutants the scientists identified, the biggest killers are fires that people use for heating their homes and cooking, which often burn fuels such as wood and coal. These fires cause about one-third of the premature deaths, according to the study that will be published in tomorrow's (Sept. 17) issue of the journal Nature.

"Residential energy use is an inefficient form of fuel combustion that causes a lot of smoke, and is the foremost source of premature mortality in Asia," Lelieveld said.

The next biggest killer is air pollution from agriculture, such as the ammonia gas that is released when fertilizer breaks down in the environment. Agriculture pollution is responsible for about one-fifth of the premature deaths the scientists analyzed, and agriculture is the leading source of outdoor air pollutants in Europe, Russia, Turkey, Korea, Japan and the Eastern United States, the researchers said.

Other artificial sources of outdoor air pollutants include power plants that make energy from fossil fuels, industrial processes, the burning of wood and other organic materials and land traffic. Together, these cause nearly one-third of all premature deaths due to air pollution, the researchers said. Natural sources of outdoor air pollutants, especially desert dust in the atmosphere, accounted for nearly one-fifth of all premature deaths from air pollution.

Air pollution is usually worse in cities, and the scientists estimated 2 million people in urban areas die prematurely each year due to outdoor air pollution. The researchers added that the global urban population is expected to grow rapidly in the future, increasing from the current 3.6 billion to 5.2 billion by 2050, and they estimated that 4.3 million people would die prematurely annually in cities due to outdoor air pollutants by 2050.[ Earth in the Balance: 7 Crucial Tipping Points]

In a related study that will also published tomorrow, other researchers found that reducing air pollution can improve human health. In fact, up to 1,700 premature yearly deaths were prevented by recent large reductions in fires in the Brazilian Amazon, according the findings detailed in the journal Nature Geoscience. About 15 percent of the Brazilian Amazon was deforested between 1976 and 2010 ─ most of it by burning ─ in order to make way for farms. However, since 2004, Brazil substantially reduced its deforestation rates. An associated drop in fires led airborne particle concentrations during the dry season to decline by about 30 percent, improving air quality.

Computer simulations from Lelieveld and his colleagues showed that if the world's production of air pollution continues as usual, and air quality and emission standards stay unchanged through 2050, there will be moderate increases of the number of premature deaths in Europe and the United States, with most of the increases coming in urban areas.

However, very large increases in deaths are expected in South Asia and East Asia, and the yearly global death toll from air pollution could reach 6.6 million people in 2050, Lelieveld said.

"If this growing premature mortality by air pollution is to be avoided, intensive air-quality-control measures will be needed, particularly in South and East Asia," Lelieveld said. "Our study shows that it is particularly important to reduce pollution emissions from residential energy use in Asia. By reducing agricultural emissions, air quality would also improve, especially in Europe, the Eastern U.S.A. and in Eastern Asia."