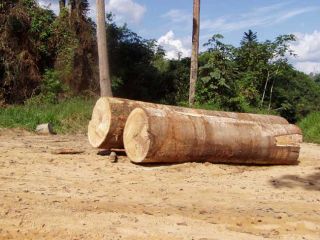 Splintered, charred wood litters the outskirts of an expansive ranch that lies on recently cleared land in the Brazilian Amazon. On the newly planted pasture, cattle leisurely graze, occasionally lifting their heads to gaze past heaps of dead trees towards an island of dense vegetation that has thus far been spared.  But it too may soon be cut down.   Such scenes are becoming increasingly common as large swaths of the Brazilian Amazon are being bulldozed and burned to accommodate expanding cattle ranches. Deforestation, which is dismembering the Earth’s functional heart and lungs, is largely resulting from cattle ranching driven by economic incentives and demand for Brazilian beef, according to the Center for International Forestry Research. "Probably 80 to 90 percent of all cleared land in the region (the Brazilian Amazon) is attributable to some form of pasture or ranching," said Robert Walker, a geography professor at Michigan State University and an expert on land-use change in the Brazilian Amazon.

Brazil has historically had the distinction of serving as the world's leader of deforestation.  According to Walker, during the last three decades, an annual average of 6,500 square miles of the Brazilian Amazon — an area that is greater than the size of Connecticut — has been deforested.   Satellite data indicates that the rate of Amazonian deforestation is accelerating; in some areas, the rate increased by 50 percent since last year.  And with over 20 million people and 70 million cattle now inhabiting the Amazon, about a 600 percent increase in the last 60 years, more trees are being razed to make room for cattle ranches, said Walker. Small-scale ranchers — including poor, subsistence farmers — encroach on forests gradually, felling trees and creating modestly sized pastures in a piecemeal fashion.  By contrast, larger land owners use tractors and bulldozers to quickly mow down vast tracts of forest, and then burn remaining vegetation to establish huge ranches.  Either way, the landscape ends up fragmented and ecologically devastated.

As the world's largest tropical rainforest, the Amazon houses the world's largest collection of living species of plants and animals. It also plays a significant role in stabilizing local climate and may provide the raw materials to cures for some of the world’s deadliest diseases.   But deforestation has transformed the Amazon into ground zero for global extinction.  In addition, burning and rotting trees release carbon dioxide, which contributes greatly to climate change.    "Brazil overall is the fifth or sixth largest emitter of carbon dioxide and by far the most important source is deforestation," said Eugenio Arima, an assistant professor of environmental studies at Hobart and William Smith Colleges and a former conservation and development researcher at the Brazilian nonprofit institute Imazon.

With support from the National Science Foundation, Walker and Arima are currently researching Brazil's dynamic cattle economy; their research is exposing links between globalization and deforestation.     According to Walker and Arima's research, reduced transportation costs from the construction of highways in the Amazon, together with the rise in beef prices, provided economic incentives to increase cattle grazing in the region.  In addition, the devaluation of the Brazilian real decreased the costs of importing beef from Brazil, and efforts to reduce foot-and-mouth disease — a devastating, contagious virus in cattle — helped open new worldwide markets. "It was like the perfect storm for demand," said Walker.  Responding to resulting increases in demand for beef, slaughterhouses proliferated throughout the Brazilian Amazon.  These establishments acquire cattle from ranches, process the meat, and in some cases, export the produce directly to international consumers. Today, Brazil is the world's biggest beef exporter, said Arima.  While only 10 percent of Brazil's beef exports were supplied by the Amazon in 2005, that figure doubled by 2006 and is continuing to increase.  Major markets for Brazilian beef currently include Latin America, the European Union, Russia, the Middle East and China.  (The United States does not import Brazilian beef because it has its own large domestic cattle herds and because it prohibits the importation of beef from countries where foot-and-mouth disease has not been certified free in all sections, said Walker.)

Cattle ranches will continue to replace forests in Brazil's Amazon as long as global demand for Brazilian beef and the profitability of cattle ranching persist.  What's more, ongoing increases in global demand for soy and biofuels may convert former pastures to agriculture, pushing ranchers farther into the forest, explained Arima. The population and cattle migration into the Brazilian Amazon resembles the westward expansion across the United States in the 19th century; "Brazil's Manifest Destiny," said Walker. The Brazilian government has promoted the development of the Amazon by sponsoring economic development programs, population relocation programs and the construction of dams, highways and a natural gas pipeline in the Brazilian Amazon.   Nevertheless, the Brazilian government is also heeding some of the lessons made apparent by America's destruction of its own forests. During the last ten years, the Brazilian government has pursued aggressive policies on the designation of protected areas and on curbing encroachment in the Brazilian Amazon.   These policies have helped protect vast tracts of land that were previously up for grabs to whoever claimed them.  In addition, enforcement of protections, particularly in indigenous reserves, has improved, said Arima. Domestic and global forces will continue to drive both development and conservation in the Brazilian Amazon.  Its now a question of how much of each will occur.  "It's a two edge sword in that there is this tremendous ecosystem that is largely intact but underneath that ecosystem and within it there are riches that could be of great benefit to individuals and larger groups," explained Walker.  "If you are in Brazil long enough you will see it both ways."