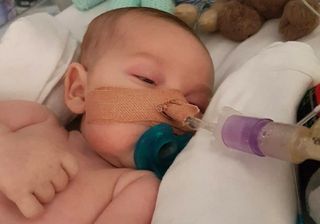 Charlie Gard, an infant in Britain, has a rare condition that affects the cell's mitochondria, which generate energy. He cannot breathe on his own, and is on life support.
(Image: © Charliegardsfight/Facebook)

In a court hearing on Thursday (July 13), the parents of Charlie Gard, the critically ill baby in Britain, were at odds with their son's hospital over a seemly straightforward fact: The size of their baby's head. By why is head size such an important metric for infants' health, and how difficult is it to measure?

Charlie's parents, Chris Gard and Connie Yates, are engaged in a legal battle over treatment for their son, who was born with a rare genetic condition that usually results in death in the first few months of life. The 11-month-old cannot breathe on his own, has seizures and is blind and deaf. His parents want to take Charlie to the United States for an experimental treatment, but his doctors have disagreed, saying that the treatment would not help and would only extend Charlie's suffering.

Now, the High Court in London, which previously ruled in favor of the hospital, is deciding whether to reopen the case on the grounds of new evidence.

One point in the dispute is Charlie's head size. Doctors at Great Ormond Street Hospital in London, the hospital treating Charlie, have said that his head circumference hasn't changed in three months, indicating a lack of growth that would be an important consideration for the case, according to the BBC. But Charlie's parents disagree. Yates says she has measured her son's head regularly, and that there is a 2-centimeter difference between her measurements and the hospital's measurements, the BBC reported. The judge called this dispute "absurd," and asked for the baby's head to be measured independently in the next 24 hours. [11 Facts Every Parent Should Know About Their Baby's Brain]

In general, doctors regularly measure the size of infants' heads because head circumference is an important marker of brain growth, said Dr. Saima Aftab, medical director of the Fetal Care Center at Nicklaus Children's Hospital in Miami. "The size of the head tracks very closely with the size of the brain," said Aftab, who is not involved in Charlie's case and so cannot comment on his case specifically.

If an infant's head growth doesn't track with the expected growth curve, it can be an early sign that something is wrong, Aftab said. However, doctors don't rely on only head circumference to determine if there are problems with a baby's development — they also look for signs such as whether the baby is meeting certain development milestones, Aftab said. These signs include sitting up and reaching for things, she said.

However, there are extreme cases — for example, if a child's head size at birth was less than the 10th percentile, and the head continued to stay small — that could trigger doctors to perform neurological exams sooner than they would in other, less severe cases, Aftab said.

A lack of head growth for three months during infancy would be "very alarming," Aftab said.

As for how easy it is to precisely measure a baby's head circumference, it depends on how you look at the question. The act of measuring a child's head is fairly simple — all you need is a tape measure, Aftab said. But to make sure the measurements are consistent, and to determine whether the head circumference falls within the expected range for babies that age, health care providers undergo special training, Aftab said. Doctors look for specific "landmarks" on the baby's skull to take measurements consistently, she said.

"While the tools are very simple…trained medical professionals have the knowledge of anatomical landmarks," so they can take consistent measurements, Aftab said. Parents who are not trained probably would not be able to do this, she said. That's why pediatricians recommend that parents don't try to take head circumference measurements themselves, but instead, have doctors take these measurements at regularly scheduled time points.

During the hearing yesterday, Charlie's parents walked out of the courtroom because they disagreed with a statement the judge made, according to the BBC. But they returned to the courtroom in the afternoon. The judge, Justice Nicholas Francis, says he hopes to issue a decision about the case early next week, according to the New York Times.