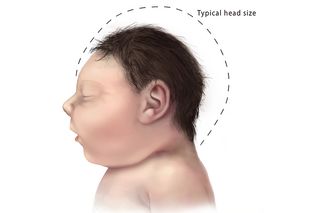 The most obvious symptom of microcephaly is that the child has a smaller head than others of the same age and gender.
(Image: © Centers for Disease Control and Prevention, National Center on Birth Defects and Developmental Disabilities)

Microcephaly is a condition in which a child's brain doesn't develop properly. The most obvious symptom is that the child has a smaller head than others of the same age and gender. Because the brain doesn't grow at a normal rate, the skull doesn't either. There are a number of possible causes; recently an outbreak of the Zika virus in mothers has been linked with microcephaly in babies in Brazil.

In the United States, this condition is rare and affects around 25,000 children each year, according to Boston Children’s Hospital. In other countries, those numbers can be much higher.

Slower brain growth can be caused by a number of factors. According to the World Health Organization (WHO), the most common causes include:

Although the Zika virus has been linked with microcephaly, a definite cause has not been proven, according to Dr. Robert Amler, vice president for government affairs, dean and professor of public health and professor of pediatrics and environmental health science at the New York Medical College in Valhalla, New York. "A sizeable increase in newborns with microcephaly, a serious birth defect, has occurred in Brazil in babies born to mothers who were infected during their pregnancies with Zika virus.”

Pregnant mothers are being urged to avoid traveling to countries where the Zika virus is present and to avoid mosquitos. As of January 27, 2016, the list of affected countries includes Barbados, Bolivia, Brazil, Colombia, Dominican Republic, Ecuador, El Salvador, French Guiana, Guadeloupe, Guatemala, Guyana, Haiti, Honduras, Martinique, Mexico, Panama, Paraguay, Puerto Rico, Saint Martin, Suriname, U.S. Virgin Islands, Venezuela, Samoa and Cape Verde, according to the Centers for Disease Control (CDC). “Travelers who wish to maintain the lowest risk to Zika virus infection should check the latest information on www.cdc.gov and/or www.who.org to obtain the most up-to-date list of travel advisories for destinations around the world,” said Amler.

Besides having a head that is significantly smaller than normal, some children with microcephaly also have backward-sloping foreheads, according to the Mayo Clinic. Babies with microcephaly may also have poor appetite, developmental delays, unusually high-pitched crying or involuntary muscle contractions.

They can also have other medical problems, such as:

It is important to note that some children simply have small heads. For microcephaly to be considered, the head circumference would be in the first percentile or lower for the baby's age and sex when compared with the normal head circumference average.

A doctor may diagnose microcephaly at birth or during wellness exams throughout the baby's first 18 months of life. The head is measured and compared with standardized charts. CT scans or an MRI and blood tests may also be required.

Microcephaly may be life-threatening in some cases. However, many children with microcephaly live long, happy lives, unaffected by microcephaly.

There is no treatment to make the head grow to normal size, but a medical professional may treat complications of microcephaly, such as hyperactivity or seizures. Children with disabilities caused by microcephaly, such as speech problems or trouble with motor skills, will need special schooling to help them reach their full potential, according to the Mayo Clinic.