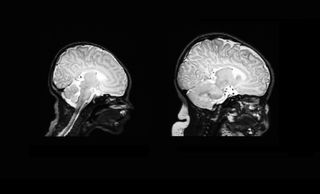 The brain scan on the left is taken from a newborn, and the one on the right is taken 90 days later.
(Image: © Dominic Holland et al., University of California, San Diego School of Medicine)

Babies' brains grow by 1 percent each day beginning right after infants are born, according to a new study that aimed to map newborns' brains during their first three months of life.

Researchers scanned the brains of 87 healthy newborns 211 times, starting when the babies were only 2 days old. They found that the newborn brain grows extraordinarily fast right after birth, but slows down to a growth rate of 0.4 percent per day by the end of three months.

Overall, infants' brains grew by 64 percent in the first 90 days, according to the study. The average brain size was 20 cubic inches (341 cubic centimeters) at birth, and 34 cubic inches (558 cubic cm) at 90 days. In other words, the brains of newborns grew from about 33 percent of the average adult brain size to 55 percent of it in three months.

The researchers noted that the brains of the infants who were born one week earlier than the average in the study (about 38 weeks), were 5 percent smaller than the average. By the end of the three months, the difference between these babies, which the researchers said were preterm, and the full-term babies became smaller, but the preterm babies hadn't fully caught up, and their brain size was 2 percent smaller than the average, according to the study, which was published today (Aug. 11) in the journal JAMA Neurology. [11 Facts Every Parent Should Know About Their Baby's Brain]

"The brains of premature babies actually grow faster than those of term-born babies, but that's because they're effectively younger — and younger means faster growth," study researcher Dominic Holland, of the University of California, San Diego School of Medicine, said in a statement. The findings suggest that inducing labor early, without a medical reason, may have a negative effect on the baby's neurodevelopment, Holland said.

The early days and months of an infant's life are the most dynamic for the brain development, the researchers said. For more than 200 years, the standard method for determining whether a baby's brain is developing normally has been to measure the skull's circumference with a measuring tape. But if doctors suspect that there's something wrong with the brain, they can use more complicated methods, such as CT scans or MRI scans, to look into the brain.

It is important to have an atlas of the rapidly changing infant brain so that researchers can compare a baby's development to a reference, and identify any early signs of neurodevelopmental disorders, the researchers said.

The researchers also tracked the growth trajectories of several brain areas during the first three months of the babies' lives. They found that the cerebellum, which is involved in movement, was the fastest-growing brain region, and its volume more than doubled in three months. This may reflect the early development of motor control in infants, the researchers said.

In contrast, the hippocampus, which is involved in forming memories, grew at the slowest rate and increased in volume by 47 percent in three months, suggesting that the development of autobiographical memory is not as important at this stage of life, the researchers said.