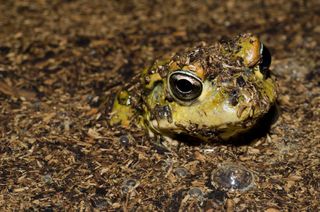 The western toad is seemingly unremarkable, lacking conspicuous characteristics that set it apart from other toads. But what it lacks in physical appearance it more than makes up in peculiar mating behaviors.

The western toad (Anaxyrus boreas) is a wide-ranging species that can be found throughout the western United States (including Alaska), Canada and Baja California, Mexico. "If you've seen a toad in the western states, it's a good chance it was a western toad," said herpetologist Greg Pauly at the Natural History Museum of Los Angeles County.

The animals typically breed anywhere between late winterand early summer, depending on location. Similar to many other species of frogs and toads, western toads are so-called explosive breeders, in which a large congregation of animals mate in a very short period of time, typically after heavy rainfall.

Western toads prefer to breed in shallow, calm aquatic habitats, including river backwaters, geothermal springs and ponds. Males migrate to these breeding sites first and find a good spot to wait for females to arrive, particularly places where the water moves slowly and there is emergent vegetation for egg attachment.

Unlike most other frog species, male western toads don't have the vocal sacs necessary to make advertisement calls to claim territory, attract mates and signal their physical fitness. Instead of calling females to them, males hop through the breeding site in active search of mates.

Every once in a while, the male western toad will find a female western toad. When he hops onto her back, he wraps his front arms around her and grips the front of her torso in a position called amplexusor the "love grab," Pauly said. Specialized nuptial pads on his forefeet increase friction and allow him to hold on tight.

Sometimes, more than one male will find and hop onto a female, resulting in a "mating ball," with each male wrestling for access to the potential mate. Females can drown underneath these mating balls if enough males join the party.

Females don't just accept whoever comes to them first. If a female doesn't like the male on her back for whatever reason, she may refuse to release her eggs and will even try to dislodge him by crawling under an exposed root (females don't have "release" chirps like males), Pauly said.

When ready to breed (typically a couple of hours to a couple of days after amplexus begins, with the male stuck to the female's back the entire time), the female will simultaneously release two strands of eggs, one from each ovary. As she releases her eggs — between a few thousand and 18,000 of them — she'll move through the shoreline and string the eggs to vegetation, blades of grass, and sticks, among other things. The male will release his sperm as the female releases her eggs.

Once all the fertilized eggs are out in the environment, the mating pair will part ways, leaving their developing babies to fend for themselves.