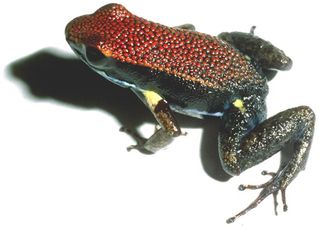 Several species of frogs are able to survive being frozen.
(Image: © David Cannatella)

Warm weather brings thoughts of spring peepers and leaping bull frogs. But what happens to frogs in the winter? If they can’t dig down far enough into the soil to avoid the ice or aren’t lucky enough to live in warmer climates, some actually freeze.

Fortunately for them, they don’t freeze to death: Most survive to mate another spring.

There are five known species of freeze-tolerant frogs in North America, including the well-studied wood frog, as well as Cope’s gray tree frog, the eastern gray tree frog, spring peepers and the western chorus frog. In the fall, these frogs bury themselves under the leaves on the forest floor — but not deeply enough to escape the icy fingers of Jack Frost.

Frogs are “cold blooded” (or more precisely, ectothermic), so their body temperature closely tracks the temperature around them. Temperatures have to dip slightly below 32 degrees Fahrenheit to freeze a frog, and ice begins to grow when an ice crystal touches the frog’s skin. Like falling dominoes, the ice triggers a cascade of particles that form as the temperature drops.

But these amphibians don’t just turn into a block of ice. A chain of events occurs to protect the freezing frog. Minutes after ice starts to form in the skin, a wood frog’s liver begins converting sugars, stored as glycogen, into glucose. This sugar is released from the liver and carried through the bloodstream to every tissue where it helps keep cells from completely dehydrating and shrinking.

As the wood frog is freezing, its heart continues pumping the protective glucose around its body, but the frog’s heart slows and eventually stops. All other organs stop functioning. The frog doesn’t use oxygen and actually appears to be dead. In fact, if you opened up a frozen frog, the organs would look like "beef jerky" and the frozen water around the organs like a "snow cone," says Jon Costanzo, a physiological ecologist at Miami University in Ohio who studies freeze-tolerance.

When in its frogcicle state, as much as 70 percent of the water in a frog’s body can be frozen, write researchers Jack Layne and Richard Lee in their 1995 article in Climate Research. Frogs can survive all winter like this, undergoing cycles of freezing and thawing.

If it gets too cold, though, they’ll die. Frogs in Ohio, in Costanzo’s neck of the woods, can survive about 24 degrees F. But frogs farther north can live through lower temperatures.

When the weather gets warmer, the frog melts. "The frog has to go through a repair process," says Costanzo. It can be sluggish when it first thaws out, and its body needs to replace some damaged cells. Scientists, however, aren’t sure what tells the heart to start beating.

Researchers are still studying this and the mechanisms that protect the frog, aside from glucose. Urea, a waste that frogs get rid of in their urine, was recently shown to help them survive freezing. And proteins may bind to the inside and outside of the cells to keep them from shrinking too much, suggests Kenneth Storey, a professor of biochemistry at Carleton University in Ottawa, Canada, who also studies freeze-tolerance.

While humans aren’t going to survive being frozen any time soon, Storey does say that studying these methods may help preserve human organs longer for transplantation.

"We’re on the edge of what you might call nature’s mechanism of transplants," he says.