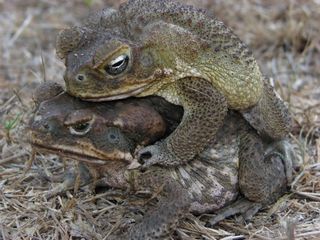 A cane toad couple mating. The male, on top, grabs the female in a hold known as amplexus that aligns the animals' reproductive excretions.
(Image: © Ben Phillips)

When grasped by a male they do not want to have sex with, female cane toads will inflate their bodies so rival males can dislodge the unwanted suitor.

Researchers recently discovered that this puffing up makes it easier for larger, more desirable male toads to knock puny, but persistent paramours off of a female's back. This novel method of mate selection – never seen before in any animal – gives females some say over who ends up as father of their tadpoles.

"Our study shows that females can exert mate choice by inflating their bodies," said lead author Bas Bruning, an ecologist at Vrije University in Amsterdam, The Netherlands.

It has long been known that toads and frogs can defensively swell themselves with air to increase their body size, a survival trick that intimidates predators and prevents snakes from being able to swallow them. Now it seems that female toads have co-opted this tactic in the evolutionary battle of the sexes.

Sex in many toads, frogs and other amphibians involves a male mounting a female's back and gripping her by the armpits. This amorous embrace, called amplexus, places the animals' cloacas – an all-purpose orifice at the rear that excretes feces, urine, eggs and sperm – close together.

Fertilization is best assured when the toady couple is similar in size and their cloacas line up, said Bruning. In most toads, females are the larger sex, so they benefit from shacking up with the bigger males in the swamp.

Mating season competition, however, is intense. Male cane toads gather around suitable waterholes, croak out to attract mates and jump on any female when she approaches. The males then battle each other for the best or – ideally for one of them – the sole amplexus position.

The expecting female, who must lay her eggs at a certain point in their maturation, enters the watery pool with a male (or males) on her back. The males release sperm as the female lays tens of thousands of eggs in long strings. Sometimes the female actually ends up drowning when too many lusty fellows gang-tackle her.

To see if females could influence the outcome of these reproductive encounters, researchers rounded up dozens of cane toads, an invasive species that is wrecking ecological havoc in much of Australia. A catheter was placed in some of the female toads' throats that prevented them from trapping air and swelling up.

The female toads were then placed in tanks along with three eager males to simulate a competitive boggy dating scene.

The smallest males in the experiment were allowed first dibs at the females. The little, though as it turns out, lucky guys who latched onto females that could not inflate themselves were never knocked off by their bigger male rivals, even over the span of several hours.

With the ballooning females, however, larger males dispossessed the tiny toads in four out of seven trials. "We found the number of male takeovers is much higher when females can inflate than when they cannot," Bruning said.

Though this inflation-influenced courtship has not been witnessed outside of the lab, "we do think it occurs in the wild," Bruning said, adding that scientists likely have not noticed it because a pumped-up female "is usually interpreted as 'agitation' and not associated with sexual behaviors."

Edmund Brodie, a professor of biology at Utah State University who was not involved with the study, finds the evidence compelling.

"This is a study that is novel and presents a new hypothesis on frog mate choice," Brodie told LiveScience. "The [paper's] conclusions are justified."

Researchers believe these extra-voluptuous females are harder to hold onto for at least two reasons: the male frog's embrace is stretched out more, and the female's body is less supple when plumped up to perhaps half-again her normal size.

Forms of mate selection that double as defensive strategies, or vice versa – such as bodily inflation in toads – might be a common but overlooked phenomenon amongst other animals.

"Many of the traits that enable a female to repel a predator also allow her to repel unwanted suitors, and hence facilitate mate choice," the researchers wrote in their study, which was published earlier this year in the journal Biology Letters.

For now, it is not known whether avoiding being dinner or being "taken advantage of" came first for the female cane toad. But the fact that body inflation is so widespread in frogs and toads offers a clue, Brodie said.

These creatures have existed much longer than snakes, an example of a predator deterred by air-engorged toads, because snakes must swallow their prey whole. Therefore, "it follows that inflation may have first evolved as mate choice and been co-opted for predator defense," Brodie said.