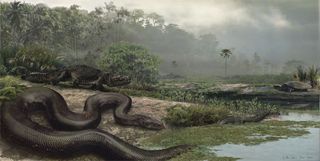 The extinct giant snake, called Titanoboa (shown in an artist's reconstruction), would have sent even Hollywood's anacondas slithering away.
(Image: © Jason Bourque.)

The largest snake the world has ever known likely had a diet that included crocodile, or at least an ancient relative of the reptile.

Scientists have discovered a 60-million-year-old ancient crocodile fossil, which has been named a new species, in northern Columbia, South America. The site, one of the world's largest open-pit coal mines, also yielded skeletons of the giant, boa constrictor-like Titanoboa, which measured up to 45 feet long (14 m).

Crocodyliforms are extinct reptiles that are distant relatives of modern crocodiles and alligators.

"We're starting to flesh out the fauna that we have from there," said study author Alex Hastings, a graduate student at the Florida Museum of Natural History.

The skull and other specimens used in the study show the newly discovered species, named Cerrejonisuchus improcerus, grew only 6 to 7 feet long (about 2 m), making it easy prey for Titanoboa.

Clearly this new fossil would have been part of the food-chain, both as predator and prey," said Jonathan Bloch, a Florida Museum vertebrate paleontologist and associate curator. "Giant snakes today are known to eat crocodylians, and it is not much of a reach to say Cerrejonisuchus would have been a frequent meal for Titanoboa. Fossils of the two are often found side-by-side," added Bloch, who was part of the fossil-hunting expeditions.

Indeed, anacondas have been documented consuming caimans — reptiles in the same family as crocodiles — in the Amazon.

The new croc species is the smallest member of Dyrosauridae, a family of now-extinct crocodyliforms. Dyrosaurids typically grew to about 18 feet and had long tweezer-like snouts for eating fish. By contrast, the newly discovered species had a much shorter snout, indicating a more generalized diet that likely included frogs, lizards, small snakes and possibly mammals.

"It seems that Cerrejonisuchus managed to tap into a feeding resource that wasn't useful to other larger crocodyliforms," Hastings said.

The study reveals an unexpected level of diversity among dyrosaurids, said Christopher A. Brochu, a paleontologist at the University of Iowa, who was not involved in the study.

The study was published in the Journal of Vertebrate Paleontology.