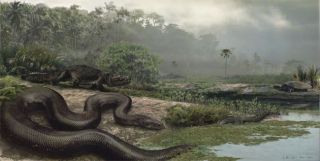 The extinct giant snake, called Titanoboa (shown in an artist's reconstruction), would have sent even Hollywood's anacondas slithering away.
(Image: © Jason Bourque.)

A colossal snake about the length of a school bus slithered about South America's rainforests some 60 million years ago, according to an analysis of the skeletal remains of what is now considered the largest snake ever identified.

"It's the biggest snake the world has ever known," said Jason Head, a paleontologist at the University of Toronto Mississauga and part of an international team who discovered and identified the snake bones. He added, "The snake's body was so wide that if it were moving down the hall and decided to come into my office to eat me, it would literally have to squeeze through the door."

Fossils of the extinct snake species, now called Titanoboa cerrejonensis, were discovered in the Cerrejon Coal Mine in northern Colombia. From the fossilized vertebrae, the researchers conservatively estimate the snake weighed about 2,500 pounds (1,140 kg) and measured nearly 43 feet (13 meters) from nose to tail tip.

The giant reptile was a boine snake, a type of non-venomous constrictor that includes anacondas and boas. In the same fossil rainforest, the researchers also found giant sea turtles and crocodile relatives.

In fact, while alive, the snake likely gorged on its crocodilian neighbors. "We think it was a completely aquatic snake, that it didn't really go out on land except to bask every once in a while," Head told LiveScience. "And aquatic snakes generally eat aquatic vertebrates, and the only other aquatic vertebrates around are these primitive crocodiles and these giant turtles. And you can imagine it's probably pretty difficult to eat a turtle when you can't chew."

The snake's enormous dimensions are a sign that temperatures along the equator where the remains were found were once much balmier.

The researchers calculated that in order to support the slithering giant, its tropical habitat would have needed a temperature of about 86 to 93 degrees Fahrenheit (30 to 34 degrees Celsius).

"Tropical ecosystems of South America were surprisingly different 60 million years ago," said Jonathan Bloch, a vertebrate paleontologist at the University of Florida, Florida Museum of Natural History, who worked with Head on the snake study. "It was a rainforest, like today, but it was even hotter and the cold-blooded reptiles were all substantially larger. The result was, among other things, the largest snakes the world has ever seen ... and hopefully ever will."

The discovery is detailed in the Feb. 5 issue of the journal Nature.