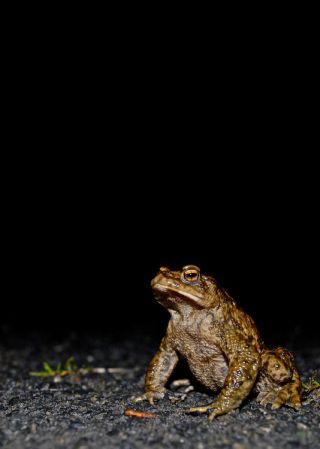 The Common European Toad (Bufo bufo), a species that has a large distribution range in Europe.
(Image: © Bert Willaert)

They're everywhere! Toads have been able to populate most of the world's continents in the relative blink of an eye. Now scientists have figured out seven factors responsible for the toads' success.

Toads (officially, Bufonidae) originated in the tropics of South America, but fanned out across most of the world over just about 10 million years — a relatively short period of time, evolutionarily speaking. The roughly 500 known toad species are incredibly diverse, both in characteristics and in habitat type and range.

"Some amphibian groups are distributed all over the world, and others are not," said evolutionary biologist Ines Van Bocxlaer of Belgium's Vrije Universiteit Brussel. "We wondered why toads expanded their range while others (like poison arrow frogs) stayed in one area?"

So the researchers retraced the evolutionary history of various toad traits and tried to identify the ones that correlated with major expansions in a species' range. They narrowed down their list of traits to seven prized qualities that together seemed to allow species to colonize a larger area than before.

1. The ability to live on partly dry land – At first toads were confined to the tropics, because they required constant water and humidity, but when some species developed the ability to live in drier habitats, they expanded to other areas.

2. Large body size – As toads balloon in size, they have a greater volume to hold onto water and relatively less surface area from which they lose water. (Toads lose water through tiny pores on the surface of the skin.) So for the heftier of the bunch, that ability allows them to live in a wider range of habitats, including drier niches than before.

3. Parotoid glands – These glands are the large bulbous lumps behind toads' eyes. The glands, which are found in cane toads, secrete poisonous chemicals to defend against predators, and they also may help toads to rehydrate. Both of these advantages allowed toads that had evolved these glands to spread out over larger ranges. Case in point: The cane toad is infamous for its invasion of Australia.

5. Ability to lay eggs in all kinds of water bodies – Originally, toads were very particular about where they deposited their eggs — they needed a very specific type and sized body of water for the eggs to hatch. But when some toads evolved the ability to lay eggs in any old puddle or temporary pool of water, it enabled them to spread far and wide.

6. Large clutch size – When toads began to produce large clutches of thousands of eggs, rather than just a handful that they invested lots of maternal care in, they were able to travel more easily and disperse farther.

"When we linked all these traits with their distribution, we could see that ancestral toads with these traits were the ones that expanded their range to conquer the world," Van Bocxlaer told LiveScience.

She noted that there are probably even more traits that helped toads get to where they are, but the rest haven't been as easy to identify.

Van Bocxlaer and her colleagues detail their findings in the Feb. 5 issue of the journal Science.