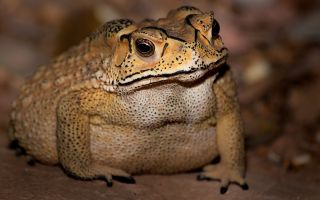 Asian common toads have evolved a toxin that is deadly to Madagascar predators.
(Image: © Benjamin Marshall)

Talk about toxic relationships. An invasive species of toad in Madagascar is even more dangerous to local wildlife than previously suspected — its poisonous slime is deadly to just about any local predator, including endangered lemurs, that tries to eat the amphibian.

The Asian common toad (Duttaphrynus melanostictus) is a newcomer to the island of Madagascar, and in just a few years it has spread rapidly. Invasive species upset the balance of local diversity and can cause big problems for native animals, but scientists recently learned that the runaway success of the toad could have even more troubling consequences than thought. [Photos: Madagascar's Treasure Trove of Species]

In the evolutionary arms race of predator versus prey, animals that habitually eat toxic creatures often evolve resistance to their poison, in the form of genetic mutations.

But when invasive species suddenly arrive in an ecosystem — as the Asian common toad did — would-be predators that have never encountered the toxic invader before are exceptionally vulnerable to the unknown threat lurking in the body of their next meal.

Prior research suggested that at least some Madagascar species might be safe from the toxic toads, as their diet of other poisonous animals meant that they may have already evolved some protection. But there was no proof to back this up, so scientists went looking for genetic evidence of poison resistance in Madagascar predators.

They gathered data from 77 Malagasy species that would be likely to eat the poisonous pests, including 28 birds, 27 snakes, 12 frogs, eight mammals and two lizards. And except for one type of rodent, every species lacked the genetic mutations associated with resistance to the toad's poison, according to a study.

Their findings suggest that the invasive toad is likely a ticking time bomb for Madagascar biodiversity. For a glimpse of what the future may hold for Malagasy animals, one need only look to another island — Australia — and see the recent impact of another toxic, invasive amphibian, the cane toad. The giant toads were released there into sugarcane plantations in the 1930s, to control the surge in cane beetles (a favorite meal for these toads). But the toads didn't just devour the beetles — they also reproduced like mad, to the detriment of native fauna that tried to eat them, Live Science previously reported.

The devastating toll on native Australian species from the introduction of the cane toad should be a grim wakeup call about the fate that likely awaits Madagascar's native predators, should the Asian common toad continue to spread unchecked, according to study co-author Wolfgang Wüster, a herpetologist and senior lecturer in zoology at Bangor University in the U.K.

"In Australia, the introduction of cane toads has caused profound perturbation to many ecosystems by removing key predators from local food webs with their toxins," Wüster said in a statement.

"Similar effects are likely to occur in Madagascar, where toads were never present before, as well; predators that frequently feed on toads and do not rapidly learn or evolve to avoid them are likely to become much rarer or possibly extinct."

The findings were published online June 4 in the journal Cell Biology.