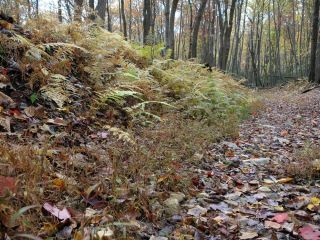 Japanese stiltgrass is in the foreground in this scene along a Frederick, Ms., trail.
(Image: © Kiel Edson)

Rachel DeSantis is a junior at the Philip Merrill College of Journalism at the University of Maryland (UMD), College Park. She contributed this article to Live Science's Expert Voices: Op-Ed & Insights.

Deep (and even not so deep) in the Frederick City Watershed in Frederick, Md., the Japanese stiltgrass grows in thick, luscious bunches. To the untrained eye, it's pretty, with its leafy layers blanketing the forest and transforming the ground into something out of a Grimm fairytale. But to those who know plants, the stiltgrass, along with several other invasive species, is less of a fairytale and more of a nightmare.

The watershed, a popular destination for mountain bikers and hikers, offers 9.5 miles (15.3 kilometers) of sanctioned trails for public use. However, many local adventurers have created their own routes through the area along unsanctioned trails, a problem that is leading to the spread of invasive species.

"These [unsanctioned] trail networks can help spread invasive species into areas where they'd otherwise be excluded," said Kiel Edson, a graduate student researching the plants as part of a University of Maryland partnership with the city of Frederick. "[The plants] tend to favor bare earth and compacted soils, all these things that generally disadvantage native species. Soon, they'll start impacting native plants and reduce overall biodiversity."

The cost of invasive species

Invasive species cost the public approximately $137 billion per year in damage, loss and control, according to the United States Forest Service. Currently, a large variety of species thrive in the Maryland forests — Japanese stiltgrass, tree of heaven, mile-a-minute weed, barberry and multiflora rose — even though none of them is native to the area. [How Google Street View Could Fight Invasive Species  ]

"These plants displace native species that would normally be there," Edson said. "There's wildlife that relies on [the native] species. [The invasives are] more prolific and they produce more seeds, and just spread so quickly. And then with the reduction of biodiversity, they become a monoculture where normally there'd be a mix of different species. Some are so dominant that the only thing you'll see is them, like the stiltgrass."

Edson is part of a group of graduate students in a sustainable development and conservation biology class. Throughout the semester, his team has studied the growth of invasive species in the forest and brainstormed potential solutions, which will be presented to the city of Frederick in 2015.

Edson's team's research focused solely on the species' growth, but past studies have also acknowledged the potential effects invasive species could have on the quality of water in a watershed, another reason to curb the plants. According to U.S. Forest Service, invasive species can be linked to the decline of native fish in aquatic systems, which can ultimately lead to the degradation of water quality.

"We were trying to see if, in fact, the trails seemed to be driving these invasive species," Edson said. "We wanted to give the city an idea of how to manage for that. [City managers] don't want to exclude mountain bikers, but they need to protect the water."

Counting the plants of the forest

One of the more challenging aspects of the research was randomizing the data, Edson said. "We did not get as much data collected as we would have liked because the season was wrong, but even with that, wherever we did find invasive species, there tended to be higher cover closer to trails, both sanctioned and unsanctioned."

The trouble with keeping invasive species contained lies with these trails. Though the city does have over 9.5 miles worth of sanctioned trails, Edson said there were close to 100 illegal trails that mountain bikers have started to use.

Though those new trails often remain free of much traffic, their creation provides a feeding ground for the invasive species that grow at an alarmingly fast rate.

"Once they get a foothold, they tend to do really well and spread really quickly," Edson explained. "In the future, we might select some [unsanctioned] trails to make them sanctioned and say 'We'll give you this, but stay off the other ones.'"

The invasive species enter the forest by many different means, and even though they are also found by sanctioned trails, keeping them away from the illegal trails is imperative to curbing the plants' growth.

"A lot of times, boots or tires have a lot of the seeds," Edson said. "They're more prevalent along roads leading into the watershed, so as people drive, their cars pick [them] up; as [people] get out on the sides of the roads, they walk the trails and it looks like the invasives are thick right where the trails start."

Edson suggested placing shower stations near the entrance of the trails to encourage people to rinse off their shoes and bike tires to help stop the spread of seeds, but admitted it may not be the best solution, because much of the public is completely unaware of the issue.

Jenny Willoughby, the sustainability manager for Frederick, also acknowledged a need for awareness.

"[We're working on] getting more education out there and involving more people to get them to realize that everything they do impacts the watershed," she said. The Frederick Watershed and its water supply is a vital asset to the ever-growing city.

"The primary objective of the watershed is clean, reliable water," Edson said. "30 percent of Frederick's water supply comes from that watershed. Invasive species and mountain bikers can affect water quality by exposing the earth, and when it starts to rain, the soil can become eradicated."

Maintaining a high quality of water has been on the city's radar for quite some time, as it can be seen in the Forest Stewardship Plan created for the watershed several years ago.

However, the plan is outdated, and it has become a city priority to be prepared as the invasive species continue to spread and the resident population continues to grow. The city's population is expected to increase by more than 14,000 in the next five years, according to the Metropolitan Washington Council of Governments.

"The Department of Natural Resources has given us information about the trail system," Willoughby said. "They've mapped the entire trail system ... and highlighted which trails had different issues. I'm [using this to develop] the sustainability master plan."

Willoughby said a watershed ad hoc committee is currently in place to rework the existing plan to include updated information regarding the existence, effects and potential solutions concerning the invasive species.

"There are many recommendations to eliminate the source of the propagule, or the introduction of invasive species," Edson said. "If you can stop that from happening, if you can keep the mountain bikers off of that, it'll allow [the city] to manage that effectively. The idea is to stop introductions. In some cases that might be enough. If you're not bringing more, [the invasives] may eventually die out."

Preventing the spread through public awareness is important, but stopping the growth of plants already in the forest is a more difficult challenge.

"There are a series of options [for] how to deal with them," Edson said. "The management is different for different plants. In some cases it's chemical, sometimes it's mechanical, but that's labor-intensive."

The city currently employs one forester, managed by the Maryland Department of Natural Resources, who has been working on eradicating some of the species.

"Managing the [spread] depends on the species," Willoughby said. "For something like tree of heaven, they'll use the hack-and-squirt method, where they'll hack into a tree and squirt in some chemicals. If you try to cut the tree down, it'll just produce more. You have to kill the tree and the tree system."

While chemicals and herbicides are effective, there are some concerns about the use.

"Herbicides are not selective," Edson said. "It'll just kill all the plants."

Additionally, the idea of using herbicides in a watershed, where the goal is to protect the water, may be risky. When applying the chemicals, they have the potential to stray from the site of their original intended use, polluting the water and posing a toxic threat to fish and wildlife.

Edson's team will provide their findings to the city as Frederick strives to reach their goal of clean water and sanctioned trails free of invasive species.

"The information that we've gotten from them has been super helpful and will inform a lot of our projects," Willoughby said.

Uri Avin, a UMD professor and director of the partnership, said Frederick will greatly benefit from the continued work in not just its forests, but throughout the entire city.