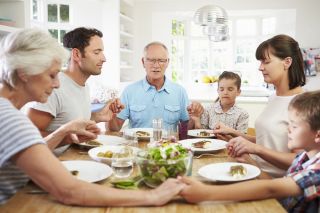 A slow fade from religious life may be less disruptive to your relationship with mom and dad than rejecting or changing religions altogether, a new study finds.

The findings may not surprise anyone who has quietly stopped going to services except on major holidays, but they're important for social scientists studying family harmony. According to a 2008 report by the Pew Forum on Religion and Public Life, 28 percent of Americans have rejected the religion of their childhood in order to switch faiths or to move away from religion as a whole.

Previous studies have found that families that share a faith between generations tend to be tighter-knit than those who don't, meaning that religious shifts between the generations could predict how close families are likely to be. [8 Ways Religion Impacts Your Life]

"Children who change religions or reject their parents' religious beliefs and values may lose opportunities to engage in intimate communication with their parents," said lead study author Woosang Hwang, a doctoral candidate in human development and family science at Syracuse University.

The new study, published in the June 1 issue of the Journal of Family Issues, drew from the Longitudinal Study of Generations, which first recruited grandparents from Southern California in 1971 and their children and grandchildren to answer questions about their lives and family interactions. The people in the survey were interviewed seven more times after the initial interview, through 2005.

In the 1971 survey, 31 percent of the young adult respondents said they had religious affiliations different from that of their mothers, and 32 percent had different affiliations from their fathers. More than half differed from their parents in how frequently they attended religious services and in religious intensity, a measure of how important religion is to one's sense of self.

The correlation between closeness and religious affinity was stronger for mothers and children than it was for fathers and children, though the relationship was weakened regardless of the parent's gender, the researchers found. Though the study continued over three decades of periodic surveys, these gaps neither widened nor closed after young adulthood; the rifts associated with religious affiliation changes seemed quite stable. [Creationism vs. Evolution: 6 Big Battles]

The study wasn't designed to explain why a switch in religious affiliation might lead to a greater rift between parent and child than a decrease in religious activity, but Hwang and his colleagues speculated that the rejection of childhood religion might remove a regular opportunity for parents and their adult children to interact — be it through church, temple or other religious services. The rejection of the parents' religion might also cause intergenerational conflict, especially when it comes to the religious education of the grandchild generation, the researchers wrote. Or the rejection might reflect underlying differences in ideologies and social preferences between the generations.

While most Americans report belief in God and some religious affiliation, there has been a weakening of religious life in the United States. The 2008 Pew survey on religion in America found that 16 percent of American adults say they are religiously unaffiliated, which was twice the 7 percent who said they'd been raised that way. And although 77 percent of Americans reported a religious affiliation, according to that same survey, actual religious behavior is less common among the younger generation. For instance, while 80 percent of younger millennials born between 1990 and 1996 said they believed in God, only 28 percent attended services weekly. For comparison, 51 percent of adults born between 1928 and 1945 said they attended weekly services.

Hwang and his colleagues now plan to study how or if children can split from their parents' religion with minimal disruption to the relationship, he said. The researchers are also investigating the impact of following two different religious traditions on the relationship between husbands and wives.