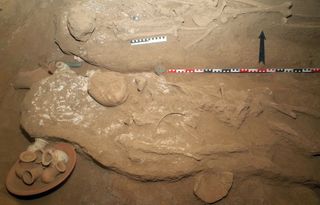 The ancient tomb found on Sai Island seems to have been built for a man named Khnummose. His remains remains along with those of possibly his wife were buried there.
(Image: © AcrossBorders project/Julia Budka)

A 3,400-year-old tomb holding the remains of more than a dozen possibly mummified people has been discovered on Sai Island, along the Nile River in northern Sudan.

Archaeologists discovered the tomb in 2015, though it wasn't until 2017 that a team with the AcrossBorders archaeological research project fully excavated the site.

The island is part of an ancient land known as Nubia that Egypt controlled 3,400 years ago. The Egyptians built settlements and fortifications throughout Nubia, including on Sai Island, which had a settlement and a gold mine. The tomb, which contains multiple chambers, appears to hold the remains of Egyptians who lived in or near that settlement and worked in gold production. [See Photos of the Ancient Tomb on Sai Island]

The artifacts found in the tomb include scarabs (a type of amulet widely used in Egypt), ceramic vessels, a gold ring, the remains of gold funerary masks worn by the deceased and a small stone sculpture known as a shabti. The ancient Egyptians believed that shabtis could do the work of the deceased for them in the afterlife. Some of the artifacts bore Egyptian hieroglyphic inscriptions that revealed the tomb was originally created for a man named Khnummose, who was a "master gold worker."

"We will try to extract ancient DNA from the [bones] of the bodies in question," said Julia Budka, professor for Egyptian Archaeology and Art History at the Ludwig-Maximilians-University of Munich. "If the [ancient] DNA is preserved, this will help us a lot. Otherwise, it all remains tentative," said Budka, who noted that the samples are already at the Department for Archaeogenetics at the Max Planck Institute for the Science of Human History in Jena, Germany.

The archaeologists said they aren't sure how many of the bodies were mummified.

"The state of preservation is very difficult here," Budka said. "I am waiting for the report of my physical anthropologists. For now, the position and also traces of bitumen speak for some kind of mummification for all persons in Tomb 26 who were placed in wooden coffins." Bitumen is a type of petroleum that the ancient Egyptians sometimes used in mummification.

Many of the coffins are also poorly preserved, and it's uncertain exactly how many of the people were buried in coffins, Budka said.