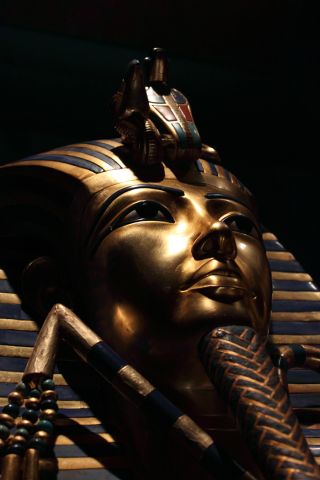 Tutankhamun was an Egyptian pharaoh who lived between roughly 1343 and 1323 B.C. Often called the "boy-king," he ascended the throne at around the age of 10.
(Image: © Horemweb | Wikimedia.)

Egypt's King Tutankhamun was embalmed in an unusual way, including having his penis mummified at a 90-degree angle, in an effort to combat a religious revolution unleashed by his father, a new study suggests.

The pharaoh was buried in Egypt's Valley of the Kings without a heart (or a replacement artifact known as a heart scarab); his penis was mummified erect; and his mummy and coffins were covered in a thick layer of black liquid that appear to have resulted in the boy-king catching fire.

These anomalies have received both scholarly and media attention in recent years, and a new paper in the journal Études et Travaux by Egyptologist Salima Ikram, a professor at the American University in Cairo, proposes a reason why they, and other Tutankhamun burial anomalies, exist. [See Photos of King Tut's Mummy & His Burial]

The mummified erect penis and other burial anomalies  were not accidents during embalming, Ikram suggests, but rather deliberate attempts to make the king appear as Osiris, the god of the underworld, in as literal a way as possible. The erect penis evokes Osiris' regenerative powers; the black liquid made Tutankhamun's skin color resemble that of Osiris; and the lost heart recalled the story of the god being cut to pieces by his brother Seth and his heart buried.

Making the king appear as Osiris may have helped to undo a religious revolution brought about by Akhenaten, a pharaoh widely believed to be Tutankhamun's father, Ikram said.

Akhenaten had tried to focus Egyptian religion around the worship of the Aten, the sun disc, going so far as to destroy images of other gods. Tutankhamun was trying to undo these changes and return Egypt back to its traditional religion with its mix of gods.

Ikram cautions that her idea is speculative, but, if correct, it would help explain some of the mysteries surrounding Tutankhamun's mummification and burial.

Tutankhamun's mummified penis eventually broke off from his body after the mummy was discovered, at one point leading to media speculation that it had been stolen.

Ikram has yet to encounter another Egyptian mummy buried with an erection. "As far as I know, no other mummy has been found thus far with an erect penis," she told LiveScience in an email.

The imagery of King Tutankhamun's erect penis has a connection to the god Osiris, Ikram said. "The erect penis evokes Osiris at his most powerfully regenerative moment, and is a feature of 'corn-mummies,' the quintessential symbols of rebirth and resurrection," she writes in her paper. Corn-mummies were nonhuman artificial mummies created in later periods in honor of Osiris. They were made of a mix of materials, including grain.

Evidence revealed in a recent documentary suggests that literally Tutankhamun's mummy went up in flames, something apparently brought about by the large amount of black oils and resins applied to his body.

The embalmers applied an abnormally large amount of this black goolike material to Tutankhamun's body for the time period in which he lived and they also applied it to the pharaoh's coffins. In October 1925, Howard Carter, an archaeologist who led the team that discovered the tomb in 1922, wrote, "the most part of the detail is hidden by a black lustrous coating due to pouring over the coffin a libation of great quantity."

Using large amounts of this black liquid, which turned King Tut's skin a blackish color, may have been a deliberate attempt to depict the pharaoh, as literally as possible, as Osiris.

"The mass of oils and resins applied to Tutankhamun's body might also allude to the black color associated with Osiris as lord of the land of Egypt, dark with the rich soil of the inundation, and the source of fertility and regeneration," Ikram writes in the paper.

Another mysterious anomaly is the absence of the pharaoh's heart and lack of a heart scarab to serve as a replacement. "This organ was a key component for the successful resurrection of the body," Ikram wrote, noting that in Egyptian mythology, the heart was said to be weighed against the feather representing the god Maat to determine if one was worthy of resurrection. [See Images of Egyptian Mummification Process]

The absence of Tutankhamun's heart or heart scarab does not appear to be the result of theft, she noted, but, instead, may be an allusion to a famous story in the legend of Osiris when his body was cut apart by his brother Seth and the god's heart was buried.

A cut typically used to remove a mummy's internal organs was unusually "brutal" and large on King Tut, Ikram noted, another allusion, perhaps, to Seth’s butchery of Osiris.

Other pieces of evidence also point to Osiris. For instance, the burial chamber's north wall shows King Tut as Osiris through its decoration.

"Tutankhamun is shown as a fully fledged Osiris — not simply a wrapped mummy," Ikram noted. "This representation of the king as Osiris is unique in the Valley of the Kings: Other tombs show the king being embraced by Osiris or offering to him."

In a sense, Ikram's idea, if it is correct (Ikram is careful to note that her idea is speculative), brings the investigation of Tutankhamun’s mummy full circle. It was Carter who first noted the pharaoh was being depicted as Osiris.

"[P]erhaps Carter's emphasis in his notes during the unwrapping and examination of the mummy is more correct than even he thought: the king was indeed being shown as Osiris, more than was usual in royal burials," Ikram writes in her paper.

Tutankhamun, and/or those who embalmed him, may have been pressured to do this in reaction to the failed religious revolution attempted by his father.

"One can speculate that at this delicate historical/religious time, it was thought that the usual modes for the transformation of the king were not sufficient, and so the priest-embalmers prepared the body in such a way so as to literally emphasize the divinity of the king and his identification with Osiris," Ikram writes.