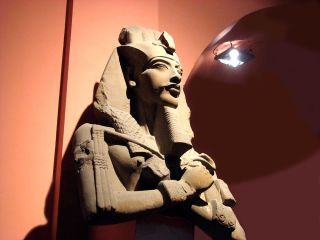 A statue of Akhenaten is displayed in the Cairo Museum.
(Image: © Sphinx Wang / Shutterstock.com)

Akhenaten was a pharaoh of Egypt who reigned over the country for about 17 years between roughly 1353 B.C. and 1335 B.C.

A religious reformer he made the Aten, the sun disc, the center of Egypt’s religious life and carried out an iconoclasm that saw the names of Amun, a pre-eminent Egyptian god, and his consort Mut, be erased from monuments and documents throughout Egypt’s empire.

When he ascended the throne his name was Amenhotep IV, but in his sixth year of rule he changed it to “Akhenaten” a name that the late Egyptologist Dominic Montserrat translated roughly as the “Benevolent one of (or for) the Aten.”

In honor of the Aten, he constructed an entirely new capital at an uninhabited place, which we now call Amarna, out in the desert. Its location was chosen so that its sunrise conveyed a symbolic meaning. “East of Amarna the sun rises in a break in the surrounding cliffs. In this landscape the sunrise could be literally ‘read’ as if it were the hieroglyph spelling Akhet-aten or ‘Horizon of the Aten’ — the name of the new city,” wrote Montserrat in his book "Akhenaten: History, Fantasy and Ancient Egypt" (Routledge, 2000).

He notes that this capital would quickly grow to become about 4.6 square miles (roughly 12 square kilometers) in size. After his death, the pharaoh’s religious reforms quickly collapsed, his new capital became abandoned and his successors denounced him.

Akhenaten, either before or shortly after he became pharaoh, would marry Nefertiti, who in some works of art is shown standing equal next to her husband. Some have even speculated that she may have become a co-, or even sole, ruler of Egypt.

Heir to an empire

Akhenaten was the son of Amenhotep III and his wife Queen Tiye. During their rule, Egypt ruled an empire that stretched from Syria, in west Asia, to the fourth cataract of the Nile River in modern-day Sudan.

At the site of Akhenaten’s new capital about 350 tablets known as the “Amarna letters” were uncovered in 1887, showing the diplomatic correspondence between Akhenaten, his fellow kings in west Asia, as well as those of vassals who owed the Egyptian king allegiance.

The letters indicate that an empire called the Hittites, based in modern-day Turkey, became increasingly assertive during Akhenaten’s rule, going to war against the Mitanni, a people who had been an Egyptian ally. “In addition to their conflicts with the Mitanni, the Hittites were also stirring up instability in the vassal states of Syria, and a nomadic group, the Apiru, was creating unrest in Syro-Palestine,” writes Egyptologists David Silverman, Josef Wegner and Jennifer House Wegner write in their book "Akhenaten and Tutankhamun: Revolution and Restoration" (University of Pennsylvania Museum of Archaeology and Anthropology, 2006).

They note that while previous Egyptian kings would likely have launched a military expedition into west Asia as a result of these acts, Akhenaten appears to have done nothing. “Some modern scholars criticize Akhenaten, noting that he focused all of his efforts on his religious ideas and thereby allowed Egypt’s international prestige to deteriorate.”

Turning to the Aten

While the Aten, the sun-disc, was nothing new in Egyptian religion, Akhenaten’s decision to make it the focus of religious life, to the point where he desecrated the names of Amun and Mut, was something entirely new.

Montserrat notes that at Karnak, a temple complex near Luxor that was devoted to Amun-Ra, the king would have a series of Aten temples built, their construction beginning perhaps in his very first year of rule.

Even at this early stage, he appeared to have a dim view of the god Amun, whom Karnak was dedicated to. Montserrat notes that the axis of the new Aten complex was built facing to the east, toward the rising sun, whereas the rest of Karnak is oriented towards the west, where ancient Egyptians believed the underworld to be. “So Akhenaten’s first major building project turns its back on the temple of Amun, perhaps anticipating the events later in his reign,” Montserrat wrote.

Egyptologist James Allen notes in his book "Middle Egyptian: An Introduction to the Language and Culture of Hieroglyphics" (Cambridge University Press, 2010) that sometime between the ninth and 11th years of Akhenaten’s reign, he changed the long form of the god’s name so that, in essence, the Aten became “not just the supreme god but the only god.”

This coincided with the start of a campaign aimed at desecrating the names of the gods Amun and Mut, among other deities. “Akhenaten’s minions began to erase the names of Amun and his consort, Mut, and to change the plural… ‘gods’ to the singular ‘god.’ To judge from later inscriptions, the temples of the older gods may have been closed as well, and their priesthoods disbanded,” Allen writes.

This extraordinary event occurred throughout Egypt’s empire. “Care was taken to erase the name of Amun even from the letters in the diplomatic archive, commemorative scarabs, and the tips of obelisks and pyramids; the distant regions of Nubia were also affected, as far as Gebel Barkal at the Fourth Cataract of the Nile,” writes Egyptologist Erik Hornung in his book "Akhenaten and the Religion of Light" (Cornell University Press, 1999).

“In some instances Akhenaten even had his own original personal name [Amenhotep, the name when he first assumed power] mutilated in his effort to do harm to the hated Amun.”

Still Akhenaten appears not to have been able to convince all Egyptians to put their sole spiritual hopes in the Aten. Archaeologist Barry Kemp, who leads modern-day excavations at the site of Amarna, notes in his book "The City of Akhenaten and Nefertiti" (Thames and Hudson, 2012) that researchers have found figures depicting other deities, such as Bes and Thoth, at Amarna.

He also notes that few Egyptians appear to have added the word “Aten” to their name in honor of the god. In fact the sculptor Thutmose, who created an iconic bust of Nefertiti that’s now in a museum in Berlin, left his name in such a form that it honored the god Thoth.

In addition to his radical religious changes, Akhenaten also unleashed a revolution in the way art was drawn. Before his time Egyptian art, especially those portraying royalty, tended to show a stiff, structured, formal style.

This changed radically in Akhenaten’s time, with people being drawn with cone shaped heads and thin spindly limbs. The royal family was even drawn in a way that conveyed intimate moments. One depiction, reproduced in Hornung’s book, shows Akhenaten and Nefertiti riding a horse-drawn chariot, the two appear to be kissing each other with the rays of the Aten shining down on them.

This radical departure in art, particularly the distorted body shapes, has long left Egyptologists mystified. Hornung writes that in 1931 the German Egyptologist Heinrich Schäfer commented, “anyone who steps in front of certain of these representations for the first time recoils from this epitome of physical repulsiveness. His [Akhenaten’s] head seems to float atop his long, thin neck. His chest is sunken, yet there is something feminine about its form. Below his bloated paunch and his fat thighs, his skinny calves are a match for his spindly arms …” observed Schäfer.

Why Akhenaten chose to depict himself and others this way is a mystery. It’s been hypothesized that he suffered from a severe physical deformity that made him change the Egyptian style of art. However recent study of a mummy found in KV 55, in the Valley of the Kings, which some believe is Akhenaten, show no signs of serious physical deformities.

Kemp writes in his book that if it is true Akhenaten was not deformed then we have to look into the psyche of the man to find the answers to this mystery. “The images are a wake-up call that here is someone not in the mainstream of humanity. He is one of a kind, on the edge. He wants you to feel uncomfortable and yet – as conveyed through the relaxed poses and overt affection for his family (as found in some of the art) to love him at the same time.”

The dark side of Amarna

Regardless of whether or not Akhenaten wanted people to love him, recent research shows that the people who built his new city, out in the desert, paid a steep price.

Recent research published in the journal Antiquity shows that the common people at Amarna suffered from nutritional deficiencies and a high juvenile mortality rate, even by the standards of the time.

The children had stunted growth, and many of the bones were porous due to nutritional deficiency, probably because the commoners lived on a diet of mostly bread and beer, archaeologist Anna Stevens told LiveScience in an interview at the time the research was published.

Researchers also found that more than three-quarters of the adults had degenerative joint disease, likely from hauling heavy loads, and about two-thirds of these adults had at least one broken bone as reported in the LiveScience story.

Akhenaten’s final years are shrouded in mystery. Until recently, Egyptologists had noted that Nefertiti’s name appears to disappear around year 12 of his reign, the time the last of his major monuments were built.

It has been speculated that she may have fallen out of favor with Akhenaten, or that her name was changed so that she became a co-ruler of Egypt. However, a recent discovery challenges all of this. In December of last year, Egyptologists with the Dayr-al-Barsha project announced that they had found an inscription, dated to year 16 of Akhenaten’s reign (shortly before his death), that mentions Nefertiti and shows that she was still Akhenaten’s “chief wife” (in the researchers words).

Whatever happened in Akhenaten’s final years his religious changes, and new capital, would not survive his death. Within a few years of his death (which occurred around 1335 B.C.) a new king named Tutankhamun, whom many researchers now believe to have been Akhenaten’s son, ascended the throne.

A boy king, he had originally been named Tutankhaten, in honor of the Aten, but his name was changed to honor Amun, the god whom his father had tried to have wiped out. During Tut’s reign, Egypt would return to its original religious beliefs, Amun and Mut assuming their places on top of the Egyptian pantheon of gods.

The capital that Akhenaten built would become abandoned within a few decades of his death, and the “heretic king” would fall into disgrace, not even being included on some king lists of Egypt.

Furthermore, Tutankhamun would condemn Akhenaten’s actions in a stela found at Karnak. Part of it reads “the temples and the cities of the gods and the goddesses, starting from Elephantine [as far] as the Delta marshes… were fallen into decay and their shrines were fallen into ruin, having become mere mounds overgrown with grass… The gods were ignoring this land…”

[From "The City of Akhenaten and Nefertiti," by Barry Kemp]

The message was clear, Akhenaten, through his radical religious changes, had turned his back on the gods and so offended them. Tutankhamun and his successors would restore things to how they had been before.