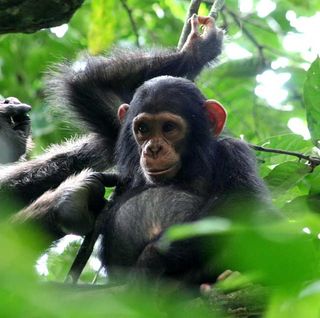 Chimps remain cool under fire, possessing a near human ability to predict how wildfires spread and react accordingly.

This newfound capability of chimpanzees to understand flames might shed light on when and how our distant ancestors first learned to control fire, scientists now suggest.

Primatologist Jill Pruetz at Iowa State University in Ames was observing savanna chimpanzees in Senegal in 2006 as people were setting wildfires, an annual tradition that clears land and aids hunting. Most areas within the chimpanzees' home range are burned to some degree.

"It was the end of the dry season, so the fires burn so hot and burn up trees really fast, and they were so calm about it," Pruetz said of the chimps. "They were a lot better than I was, that's for sure."

For the most part, wild animals consider fire very distressing, but the chimpanzees showed no sign of stress or fear with the wildfires, other than calmly avoiding the fire as it approached them.

"I was surprised at how expert they were at handling the fire," Pruetz told LiveScience. "The fire was burning really hot, and the flames were at least 10 feet high, up to 20 feet at times."

The apes were experts at predicting where the fire would go, Pruetz noted. "I could predict it, sort of, but if it were just me, I would have left," she said. "At one time, I actually had to push through them because I could feel the heat from the fire that was on the side of me and I just wasn't that comfortable with it."

So far Pruetz noted the chimpanzees they saw have mastered the first stage, which is the prerequisite to the other two. In fact, they are very aware of fire and its power — they have even developed a unique fire dance.

"Chimps everywhere have what is called a 'rain dance,'" she said. The term, coined by famed primatologist Jane Goodall, is a male display to show dominance.

"Males display all the time for a number of different reasons, but when there's a big thunderstorm approaching, they do this real exaggerated display — it's almost like slow motion," Pruetz said. "And when I was with this one party of chimps, the dominant male did the same sort of thing, but it was towards the fire, so I call it the fire dance."

"The other interesting thing was that I heard a vocalization that I never heard before and I've never heard since," Pruetz continued. It was a kind of 'wraah-bark' most likely given by the alpha male, she noted.

These findings provide insight into how the earliest human ancestors first developed the ability to control fire, the thinking goes..

"If chimps can understand and predict the movement of fire, then maybe that's the thing that allowed some of the very earliest bipedal apes to eventually be able to control fire," she said.

Pruetz does not see chimpanzees in the wild figuring out to how to start a fire anytime soon — at least, not without help. Still, chimpanzees in a zoo in South Africa were seen lighting and extinguishing cigarettes without getting burned.

"I could see them learning how to control fire — I think they have the intellectual ability," Pruetz said. "It might be difficult only because of their dexterity, since they're less dexterous than us."

Pruetz and her colleague Thomas LaDuke at East Stroudsburg University detailed their findings online December 18 in the American Journal of Physical Anthropology.