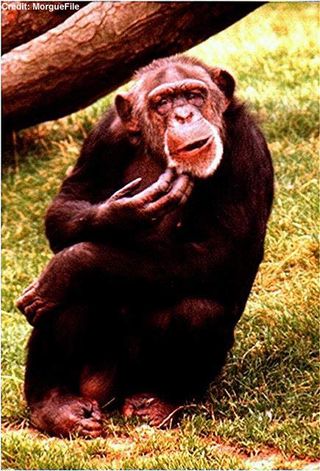 Study Suggests Most Chimps are Lefties

While you might think of yourself as smarter than the average ape, beware: Those distant relatives of ours have a knack for evolving more quickly than we do.

And by revealing this through DNA analysis, scientists have provided support for a controversial hypothesis that chimpanzees are more closely related to humans than to other species of great apes with which they're currently classified.

The findings were announced today by the Proceedings of the National Academy of Sciences.

Researchers generally agree that humans and chimps diverged from a common ancestor about 5 million to 7 million years ago.

Chimps are lumped with gorillas and orangutans in the same family, Pongidae, whereas humans are in the family Hominidae.

But a study in 2003 found that 99.4 percent of important DNA sites are the same in chimps and humans. Other researchers have since concluded that there are crucial differences in the genetic software of the two species, however. Only a few months ago was the full chimp DNA sequence unraveled.

In the new study, scientists examined how quickly each species evolves. The figure they work with is called a molecular clock. It involves the rate at which DNA base pairs match up incorrectly, creating genetic errors called substitutions. These are the mutations that cause changes in a species over time.

The upshot: There seem to be fewer changes to the software of life in humans over time than in chimpanzees, and even fewer still than in the other apes.

This slower clock correlates with a longer time needed to reach sexual maturity—almost twice as long for humans as gorillas. Scientists call this "generation time." In order for mutations to cause lasting change in a species, they must pass on to the next generation.

Since well before modern times, humans have taken almost twice as long to reach sexual maturity as other apes, Yi said.

"A long generation time is an important trait that separates humans from their evolutionary relatives," said Navin Elango, a graduate student working with Yi. "We used to think that apes shared one generation time, but that's not true. There's a lot more variation."

"I think we can say that this study provides further support for the hypothesis that humans and chimpanzees should be in one genus, rather than two different genus' because we not only share extremely similar genomes, we share similar generation time," Yi said.

Given our evolutionary snail's pace, you might be wondering why, in just a few million years, we got so smart while chimps lagged.

"Even though mutations per se may arise in fewer numbers in humans than in chimpanzees, those that matter will quickly spread," Yi told LiveScience.  "Mutations that are advantageous to the human, such as intelligence, probably are under strong natural selection," meaning individuals either latch on to the good stuff or perish.

However, Yi and her colleagues looked only at mutations in non-functional regions of DNA, changes that don't affect evolution. "If we looked at only those mutations that are selected, it is possible we may see different results," she said.