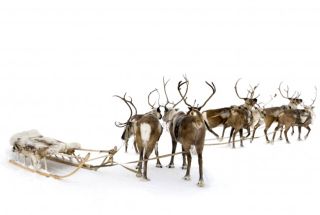 Reindeer and caribou are two names for the same species called Rangifer tarandus, with reindeer generally referring to the domesticated variety that pull sleds.
(Image: © Stockxpert.)

Dasher and Dancer and Prancer and Vixen no doubt keep an eye on recent climate change. Reindeer numbers have dropped nearly 60 percent in the last three decades due to climate change and habitat disturbance caused by humans, a study in 2009 found.

The decline of reindeer is a hot topic to more than just Santa and millions of children around the world.

"The caribou is central to the normal function of northern ecosystems," Justina Ray, executive director of Wildlife Conservation Society-Canada, said. "With their huge range requirements and need for intact landscapes, these animals are serving as the litmus test for whether we will succeed in taking care of their needs in an area that is under intensifying pressure."

Here are some reindeer facts that might surprise you (especially the last one):

They're actually Caribou. Reindeer and Caribou are two names for the same species (Rangifer tarandus), with reindeer generally referring to the domesticated variety that are herded by humans and pull sleds. Such reindeer live mostly in Scandinavia and Siberia and are typically smaller with shorter legs than their wild caribou relatives. In Siberia, caribou are called "wild" reindeer. The animal's size and weight varies by gender and age, with adult caribou reaching 3 to 4 feet tall (about 1 meter) and weighing on average up to 375 pounds (170 kg) for males and 200 pounds (90 kg) for females.

They're fast. While they may not fly, scientists say caribou can run as fast as 48 mph (80 km per hour), though their normal walk is a slow one. When alarmed by a predator, however, a caribou will trot with its head held high and parallel to the ground, and its normally floppy tail held up in the air. When chased, it will gallop quickly.

They get around. Caribou are known to travel up to 3,000 miles (nearly 5,000 km) in a year, the longest documented movements of any terrestrial mammal, according to the IUCN. Their counterpart in the water, the humpback whale, holds the record for the longest mammalian voyage, swimming 5,000 miles (8,000 km) to their balmy breeding grounds in winter.

They can handle the cold. These antlered deer live in Alaska, Canada, Scandinavia and Russia, where they graze on tundra plants. Rather than a velvety suit, reindeer are covered with hollow hairs that trap in air and keep them well-insulated from the elements. Plus, their circulatory systems keep the cooler blood in the reindeer's limbs from drawing heat from the warm blood in their core body.

They're quiet. Santa won't have to worry about his reindeer waking up the kids (at least those without bells around their necks). Female reindeer tend to communicate mainly in the first months after the birth of offspring in summer, while males vocalize exclusively during the autumn mating season. During other seasons when they do vocalize, here's how: Scientists found males are equipped with a large air sac in the neck that enables them to emit a hoarse rattling sound, or mating call. The throaty call could deter rival males while attracting a potential mate. For the females, such air sacs allow moms to individualize their calls when communicating with their young.

Santa's crew is all-female. Male reindeer shed their antlers at the end of the mating season in early December. Females, however, keep their thinner antlers throughout the winter. If all the sightings are to be believed, then it is the gals tugging pudgy Santa and the goods through the winter sky. And this might be why Santa chose an all-female crew: Male reindeer carry as little as 5 percent body fat when Christmas rolls around, having lost much of their fatty stores during the mating season. Female reindeer, however, enter winter carrying about 50 percent body fat. This natural insulator, which can be a couple of inches thick on their rumps, keeps the reindeer toasty in temperatures as low as minus 45 degrees Fahrenheit (minus 43 degrees Celsius).

Their names: For the record, the names of Santa's reindeer, recorded by Clement C. Moore in "A Visit from St. Nicholas," also known as "The Night Before Christmas," are: Dasher, Dancer, Prancer, Vixen, Comet, Cupid, Donder (or Donner) and Blitzen. And don't forget the most famous reindeer of all: Rudolph.