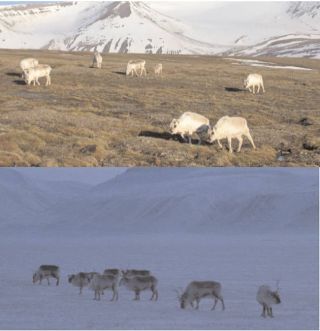 A large air sac in a male reindeer's neck allows him to let loose a throaty mating call that may boast of his fighting ability to rival males and contribute to his sexual prowess and reproductive fitness, new research shows.

The inflated air sac expands the neck region and influences the reindeer's vocal sound and neck contour, enabling him to emit a hoarse rattling sound, or rutting call, with its head kept low and also to scare off rival males, says a scientist from the Berliner Leibniz Institute of Zoo and Wildlife Research in Germany.

Both the sound and the sight of this call serves to deter rival males and thereby prevent fighting, allowing the male reindeer conserve energy. Simultaneously, the performance serves to attract female mating partners.

As in other species with harem-like mating systems, the voice organs of reindeer differ according to sex. Adult males have a much larger air sac than females and the young.

The growth of the air sac seems to be comparable in male and female reindeer until they reach the age of two or three years, at which point the female's air sac stops growing, while the male's continues to develop.

Males vocalize almost exclusively during the autumn rutting season, whereas females are mostly silent during that period. Vocal communication of females tends to mainly occur with their young, in the first months after the birth in summer. In mother-young communication, the air sac allows the mother to individualize the calls and contributes to individual recognition.

The results, also co-authored by scientists at the Ilomantsi Game Research Station in Finland and the University of Veterinary Medicine in Vienna, were published in the Journal of Anatomy.