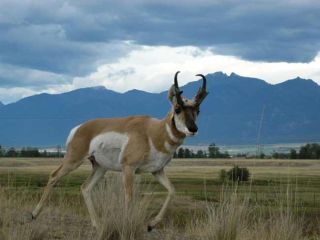 Just as the guy with the flashy sports car doesn’t always attract the ladies, female animals may not judge the male with the most elaborate ornamental display to be the best mate.

Male American pronghorns [image] lack any ornamentation, so females instead rely on observations of the males’ behavior to find the best mate, which may make their offspring more likely to survive, according to a new study.

Biologists have long thought that female animals looked for outward cues, like a peacock’s vibrant feathers, as signals of genetic quality. But the new study, published last month in the Proceedings of the National Academy of Sciences, suggests otherwise.

“Female mate choice is likely a very important evolutionary force that does much more than select for ornaments in a few species,” said John Byers of the University of Idaho and lead author of the study. “It may be universally important in maintaining genetic quality.”

Byers studied the genetics of a population of American pronghorns, an antelope-like mammal, in the National Bison range. When it is time to mate, the females visit the harems of potential mates. They observe how well a particular prospect defends his harem to judge his worthiness. Rogue males will try to infiltrate the harem and the male has to “just run back and forth, hour after hour” to defend the females, Byers said, otherwise the entire harem will leave.

“The females’ mate sampling creates a small group of males that each year sire more than one-half of all young,” Byers said. “It’s the vigorous guys that get all the matings.”

The offspring of the more vigorous males were more likely to survive to weaning, Byers found. He attributed this to faster growth rates of the offspring, which make the fawns less likely to be eaten by a coyote.