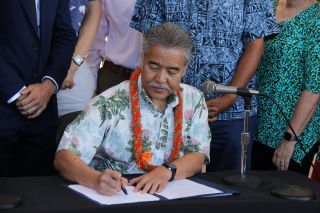 Following President Donald Trump's announcement withdrawing the United States from the Paris Agreement, some politicians are taking a stand and making their own commitments to fight climate change.

Hawaii has become the first state to sign into law the commitments and goals of the Paris climate accord, which calls for countries to reduce greenhouse gas emissions and invest in "green" technology in the hope of slowing the effects of global warming. Hawaii Gov. David Ige signed two bills yesterday (June 6) that will implement portions of the agreement.

"Hawai'i is committed to environmental stewardship, and we look forward to working with other states to fight global climate change," Ige said in a statement. "Together, we can directly contribute to the global agenda of achieving a more resilient and sustainable island Earth." [6 Unexpected Effects of Climate Change]

Nearly 200 countries signed on to the Paris Agreement. Under this pact, nations around the world would work together to keep the planet's average temperature from rising. With Trump pulling out of the agreement, the U.S. will join only two other countries that have not ratified the pact: Syria and Nicaragua. (Nicaragua has not signed on because its government did not think the Paris Agreement did enough to fight climate change.)

Hawaii's new legislation includes a bill that expands the state's plan to reduce greenhouse gas emissions to align with the Paris Agreement. Another bill establishes a "Carbon Farming Task Force," which will evaluate agriculture and aquaculture practices for improved soil health and carbon sequestration.

A similar agreement has been made by mayors across the United States. The group is known as the "Climate Mayors," and currently lists 247 signatories on its Medium post.